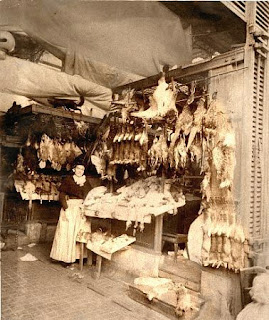 ... 1900 (110 years ago today), though some sources set the date at March 30 of the same year, in France -- la Loi Millerand, named after the Socialist Commerce Minister who later would become France's Premier --limited the working day of women and children to 10 hours, compared with 12 hours for men. In 1906 the law would be followed with another that established a day of rest, and in 1919 with yet another that regulated the work week. (credit for ca. 1898-1900 Paris photograph by Eugène Atget of woman selling poultry)