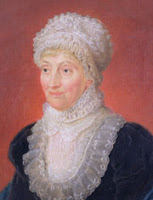 On this day in ...
... 1750 (260 years ago today), Caroline Herschel (right) was born in Hanover, Germany. After her father's death at age 19, she joined a brother, who'd moved to England to pursue a music career. She began to perform as a vocalist. But then the 2 became interested in and began to devote themselves to astronomy. As part of her study of comets, she discovered the comet 35P/Herschel-Rigollet, named after her. More than a century after her death in 1848, Herschel was honored in Planetarium, a poem by Adrienne Rich, which includes these lines: