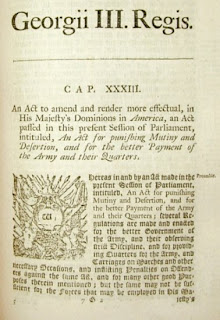 On this day in ...
... 1765 (245 years ago today), King George III gave royal assent to the Quartering Act (left), which authorized government officials to order that, "as shall be necessary," British troops be given room, board, and alcoholic beverages in private homes in the American colonies, "without paying any thing for the same." (image credit) The statute was part of a series that colonists called the Intolerable Acts; taken together, the measures became rallying cries for independence. Postcolonial antipathy to this measure is evident in the 3d Amendment to the U.S. Constitution, which states:

No Soldier shall, in time of peace be quartered in any house, without the consent of the Owner, nor in time of war, but in a manner to be prescribed by law.