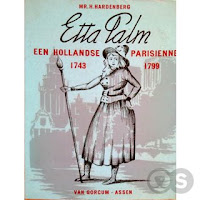 On this day in ...
... 1799, Etta Palm d'Aelders died, 56 years after she'd been born in Groningen, a city in the Netherlands. Having lost an infant daughter, and her husband having left her, by the time she was just 25 years old, she moved to France, became a courtesan, spied both for the French and the Dutch, and established her own Paris salon for intellectuals, revolutionaries, and feminists. (book cover credit) She's perhaps best known for Discourse on the Injustice of the Laws in Favor of Men, at the Expense of Women, a speech she gave a year and a half after the storming of the Bastille, on December 30, 1790, at a meeting of the 1st political club to admit women. It included a plea rather modest in that era of French Revolution:

Oh! Gentlemen, if you wish us to be enthusiastic about the happy constitution that gives back men their rights, then begin by being just toward us.

Not long afterward, Palm moved to The Hague. But after French forces invaded the Netherlands, she was arrested and jailed for years. A year after her release, she died from illnesses contracted while in detention.