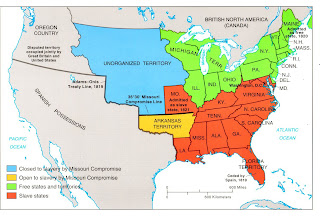 On this day in ...
... 1820 (190 years ago today), Congress passed the Missouri Compromise, the culmination of a bitter, months-long effort to stave off a civil war over slavery in the United States. Under the agreement Maine was admitted as 1 of the Union's free states (in green at left) and Missouri as 1 of the slave states (in red), but slavery was forbidden in any other territory north of the 36th parallel (in blue). (map credit) The Supreme Court would hold this compromise unconstitutional in the Dred Scott judgment decades later (prior post), and War Between the States would soon follow.