On this day in ...
... 1985, the mutilated body of Enrique "Kiki" Camarena was discovered in Guadalaja, Mexico, where the 37 year old (below left) had been working as an undercover agent for the U.S. Drug Enforcement Administration. (image credit) Law enforcement operations put into effect following his death culminated in 3 Supreme Court cases that remain landmarks on account of their 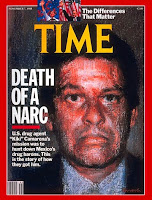 holdings respecting extraterritoriality and U.S. laws: United States v. Verdugo-Urquidez (1989), in which the Court held that 4th Amendment was not violated by the overseas warrantless search of property belonging to Mexican nationals with no ties to the United States; United States v. Alvarez-Machain (1992), in which the Court held that the Due Process Clause was not offended by the cross-border kidnapping of the defendant, a Mexican physician charged with having monitored and thus helped to prolong his torture, in order to secure personal jurisdiction over him; and Sosa v. Alvarez-Machain (2004), in which the Court established a framework for analyzing claims brought under the Alien Tort Statute in the course of rejecting the claim by the physician, whom a federal judge had acquitted of all charges.