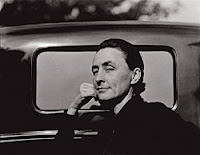 On this day in ...
... 1986, Georgia O'Keeffe died at age 98 in a hospital in Santa Fe, 65 miles southeast of the New Mexico Ghost Ranch where she'd had her home and studio studio for many decades. At the time of her death The New York Times called her "the undisputed doyenne of American painting," a key 20th century American figure "[a]s an artist, as a reclusive but overwhelming personality and as a woman in what was for a long time a man's world." It continued:

As much as anyone since Mary Cassatt, she raised the awareness of the American public to the fact that a woman could be the equal of any man in her chosen field.

She'd been born on November 15, 1887, on a wheat farm near Sun Prairie, Wisconsin, and began studying art as a young woman in Chicago. In 1916, her drawings were shown to photographer and gallery owner Alfred Stieglitz, who exclaimed:

The couple eventually married, and split their time between New York City and Lake George, New York, until Stieglitz' death in 1946. (credit for 1929 photo above of O'Keeffe, made by Stieglitz) It was then that O'Keeffe moved permanently to New Mexico, where many of her best-known paintings, like that below left, were created. Asked about how she'd developed her distinctive style at a time when women endured many social constraints, O'Keeffe said: 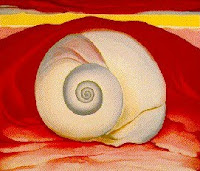 'One day I found myself saying to myself, 'I can't live where I want to. I can't even say what I want to.' I decided I was a very stupid fool not to at least paint as I wanted to.'

(Prior March 6 posts are here, here, and here)