(Read On! ... occasional posts on writing worth reading) A quick plug for a great new book on gender stereotyping and human rights law: Gender Stereotyping: Transnational Legal Perspectives by Rebecca Cook and Simone Cusack.
It cannot be gainsaid that women have been, and remain, subordinated to men in nearly every nation-state, organized religion, legal system, and cultural tradition around the globe. With startling transnational consistency, women are the subject of persistent and pervasive stereotypes that
Such stereotypes, while deeply engrained, are often invisible and unconscious in the way in which they socially construct what it means to be male and female in society and co-opt women in our own subordination. While many manifestations of overt discrimination against women—such as laws preventing women from owning property or engaging in certain professions—have been successfully challenged and dismantled through the invocation of international human 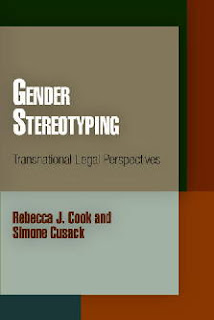 rights norms and constitutional principles of equal protection, stereotypes at times seem impervious to law.
Not so, say Rebecca Cook and Simone Cusack in their impressive new book Gender Stereotyping: Transnational Legal Perspectives (University of Pennsylvania Press, 2010) (right). Drawing on exhaustive comparative research, Cook and Cusack argue that the law—and in particular transnational human rights law—has the potential to expose and deconstruct stereotypes that justify and perpetuate women’s subordination. The authors’ primary tool in this endeavor is the Convention on the Elimination of All Forms of Discrimination Against Women (CEDAW), the multilateral treaty in the human rights pantheon devoted to women’s rights. As its title suggests, CEDAW operates from an equality paradigm, seeking

the elimination of measures that have the effect or purpose of impairing the exercise by women of human rights and freedoms on the basis of equality with men.

More radically, Article 5(a) of CEDAW further obliges states to

modify the social and cultural patterns of conduct of men and women, with a view to achieving the elimination of prejudices and customary and all other practices which are based on the idea of the inferiority or the superiority of either of the sexes or on stereotyped roles for men and women.

The Committee on the Elimination of Discrimination Against Women, an expert body charged with enforcing the Convention, has made clear in its 19th General Recommendation that states must
Cook and Cusack rightfully recognize the as-yet unmet potential for Article 5(a) to transcend CEDAW’s equality paradigm and provide an expansive framework for achieving substantive equality and a real and durable transformation in women’s daily lives.
Starting with a useful primer of social science research on the organizing role that stereotypes play in human cognition and drawing on rich case studies, the book presents examples of how governmental laws, institutions, policies, and practices can apply, enforce, and perpetuate pernicious stereotypes that harm women by denying women benefits, imposing burdens on women, or degrading women. As a prescriptive contribution, the book offers a series of practical measures to be employed by all branches of government to better

carry out state obligations under CEDAW to eliminate stereotypes in the public and private spheres. In addition, the authors urge the Women’s Committee to pay greater attention to the role that stereotypes play in the forms of discrimination it confronts and to broaden its remedial agenda to demand more from states in the form of structural changes to root out gendered stereotypes. The book closes with a blueprint for what a CEDAW General Recommendation devoted to stereotypes might look like.
This is a great achievement for the authors. Cook (right) is Professor of Law and Faculty Chair in International Human Rights, Faculty of Law, at the University of Toronto. She is the author, coauthor, or coeditor of many books, including Human Rights of Women: National and International Perspectives.
Cusack is a public interest lawyer at the Public Interest Law Clearing House in Melbourne, Australia.