(Read On! ... occasional posts on writing worth reading) I recently spent two gripping days reading Nicholas D. Kristof's and Sheryl WuDunn's riveting book, Half the Sky: Turning Oppression into Opportunity for Women Worldwide (2009). Named for a Chinese proverb that states that women hold up half the sky, the book addresses many of the multiplicity of challenges and mechanisms of violence confronting women throughout the world, including gendercide, human trafficking, rape, female genital surgery, obstetric fistulas and maternal mortality.
In each case, Kristof and WuDunn describe challenges and atrocities, and offer the stories of women (and some men) whose extraordinary characters and/or a confluence of (relatively) beneficial circumstances, allow them to triumph over circumstances that are ordinarily both soul-killing and literally murderous. Mukhtar Mai survived ritual public gang rape and humiliation to found a welfare organization and series of extraordinary schools for girls in Pakistan. Usha Narayane lead the Dalit people of Kasturba Nagar in overthrowing the rule of violent thugs and official indifference to their plight. Edna Adan has created a hospital in Somaliland spearheads an extraordinary fight against maternal mortality in the Horn of Africa. Placed in circumstances that would try any wo(man)'s soul, these individual rise to inspiring heights to help turn the tide of oppression in their neighborhoods and countries. 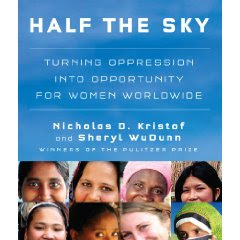 The authors also tell the stories of Westerners (mostly Americans) who have been inspired to attack these challenges in the developing world. Among others, they tell the stories of Dr. Allan Rosenfield's decades-long campaign for maternal health throughout the world; Jordana Confino's spearheading of Girls Learn International, that partners classes in the United States with others in the developing world; and the students, teachers, and administrators of the Overlake School in Redmond, Washington, which has built and maintained a school in Pailin, Cambodia.
Each of these individual stories is inspiring, and the stated aim of the authors is to inspire us, their readers, to take similar action to combat the challenges facing women worldwide. Indeed, the book provides easy tips for action, and a terrific new website has been launched as an entry point to welcome and educate new participants and activists.
I encourage you to read this book, but with the caveat that those seeking deeper understanding must commit to additional reading in order to build a more complex understanding of the issues addressed. That is, in my reading, although gripped by the stories, I felt that a big part of the story was also missing: where was the structural explanation for the condition of women worldwide? For example, with respect to human trafficking, the authors claim that sex slavery has worsened in recent decades due to: (1) the collapse of Communism, (2) globalization, and (3) AIDS. (pp. 11-12) What is "globalization?" And if one understands "globalization," can one truly state that "this is not a case where we in the West have a responsibility because we're the source of the problem." (pp. 24-25) (See my discussion below.)
The authors also choose to compare oppressions. They state:

'Anybody who has spent time in Indian brothels and also, say, at Indian brick kilns knows that it is better to be enslaved working a kiln.'

(p. 12) I am not sure of the purpose of the comparison: can multigenerational and hopelessly backbreaking enslavement be "better" in any way than sex slavery? And is it truly necessary to compare modern trafficking in humans to the trans-Atlantic slave trade? Does the comparison, as presented here (pp. 10-11), serve to confer a structural understanding of the similarities and differences in these two forms of exploitation? I was also disappointed that the description of the tactic of rape in the Congo did not include a discussion of the role of minerals, such as coltan, as a key stimulus in the ongoing conflict. What are the incentives, other than sheer cussedness and evil, for the continued conflict?
At risk of perceived self-promotion efforts, for readers wishing to explore such structural understanding of human trafficking, I recommend my three articles on the subject: Exploring the Analogy between Modern Trafficking in Humans and the Trans-Atlantic Slave Trade, 25 B.U. Int'l L. J. 207 (2007); Free Labor! Toward a Labor Liberalization Solution for Modern Trafficking in Humans, 18 Transnat'l L. & Contemp. Probs. 545 (2009); and Follow the Money?: Does the International Fight Against Money Laundering Provide a Model for International Anti-Human Trafficking in Efforts?, 6 U. St. Thomas L. J. 138 (2008).
A deeper structural understanding will point to a more uncomfortable reality: we of the West may be complicit, even in our ignorance, where the trade, economic and other policies imposed by our governments lead to circumstances that facilitate the exploitation of women. It is not enough to gain a micro understanding of the issues. We must gain a macro understanding and plan for influencing policies on the macro level.
by Karen E. Bravo at 6:16 AM