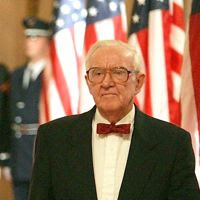 As detailed via quotes in the post below, the Legal Adviser to the U.S. Department of State, Harold Hongju Koh (below left), yesterday outlined a multi-pronged defense of the Obama Administration's use of drones for targeted killings of presumed al Qaeda operatives. (photo credit) Among the statements made during Koh's keynote speech to the American Society of International Law was this:

[S]ome have argued that the use of lethal force against specific individuals fails to provide adequate process and thus constitutes unlawful extrajudicial killing. But a state that is engaged in armed conflict or in legitimate self-defense is not required to provide targets with legal process before the state may use lethal force.

Upon hearing these words, my mind jumped at once to my 2005 interview of U.S. Supreme Court Justice John Paul Stevens (above right), for whom I had the privilege of clerking and about whom I am writing a jurisprudential biography. (photo credit) Stevens served as a Navy codebreaker at Pearl Harbor from 1942-1945, and earned a Bronze Star for that service. The relevant passage from my 2006 article entitled John Paul Stevens, Human Rights Judge described Stevens' thoughts about perhaps the most famous targeted killing of World War II:

One event days before Stevens’s twenty-third birthday would stay with him for the rest of his life. The architect of the Pearl Harbor attack was Admiral Isoroku

Yamamoto, who had learned English from a missionary and become a Babe Ruth fan while studying at Harvard in the 1920s. On April 14, 1943, Americans discovered that Yamamoto [right] was about to travel to the front. Unbeknownst to the Japanese, Stevens explained in an interview more than sixty years later, “We had broken the code.” On Roosevelt’s orders, U.S. pilots downed Yamamoto’s plane over a Solomon Islands jungle on April 18, Easter Sunday. “I was on duty on the day they brought the plane down,” Stevens said, “The message was, ‘We bagged one eagle and two sparrows,’ indicating success in the mission.” The kill buoyed the spirits of many, who knew that getting Yamamoto would, as Stevens put it, “have a tremendous strategic advantage.”

Stevens' own thoughts were more complex:

But the incident troubled the young officer. “I remember thinking that the planners must have engaged in a lot of deliberation before deciding to go along with the plan,” Stevens said. “I have read a number of books on it since and discovered that was not the case. They were concerned that targeting him would reveal that they had broken the code.” Accounts of the killing indicate that U.S. Admiral Chester A. Nimitz and others—in communications laced with foxhunting terms—debated only the tactical benefits and costs. “But they had no humanitarian concerns at all of the kind that troubled me,” Stevens said. That fact “kind of surprised me,” he continued, particularly given that Yamamoto “had spent time in the United States and had friendships among high-ranking American officers.”

Stevens reaffirmed this sensibility in a just-published New Yorker interview. There author Jeffrey Toobin tracked the Yamamoto account in my 2006 article (without, alas, citation to same). Implicitly linking the Yamamoto incident to his later discussion of Stevens' post-9/11 jurisprudence, Toobin contributed this insight:

The morality of military action became a lifelong preoccupation.

It's also worth noting that Stevens' concerns respecting that targeted killing had a profound effect on his capital punishment jurisprudence. The passage in my 2006 article thus continued:

Appearing before the Chicago Bar Association decades later, Stevens alluded to the event without naming the target. The Justice told his audience that the experience had sown doubts in his mind about another instance in which the state takes the life of a named individual; that is, capital punishment. Recalling that talk, Stevens affirmed that the Yamamoto incident led him to conclude that “[t]he targeting of a particular individual with the intent to kill him was a lot different than killing a soldier in battle and dealing with a statistic. . . . In my mind, there is a difference between statistics and sitting on a jury and deciding whether to kill a single person.”

As pointed out in note 178 of my article, Stevens revealed in a 1996 speech that, notwithstanding these doubts, at the time of his 1975 confirmation hearings, he did not himself know how he would vote on capital punishment. The Justice since has told me that in 1975 no Senator asked him his views, neither publicly nor privately. In 1976, he voted in Gregg and related cases to reinstate the death penalty. But as posted, in 2008, Stevens made public his conclusion that the death penalty, in all its applications, violates the 8th Amendment to the U.S. Constitution.
Stevens' linkage of targeted killing amid armed conflict with the targeting for execution of a convicted murderer provokes further thoughts:
► As my 2006 article observed,

My 2010 article John Paul Stevens and Equally Impartial Government (now available in pdf here, and soon to be in print in the UC Davis Law Review) sets forth a story of Stevens's family that might have encouraged careful thought about the power of the state.
► It bears particular mention that although Stevens harbored what he called “humanitarian concerns” years before he would decide to enter law school, his were, fundamentally, the concerns of a lawyer. They signaled a visceral sense that the process of law, no less than law's substance, places valuable constraints on state power.
The quote at the very top of this post stands in conflict with that sense of justice.
by Diane Marie Amann at 1:20 AM

Koh is begging the question.

Imagine that the US kills a guy in Pakistan, using a drone. As in many cases of killing of a person, his spouse might disagree with the US's action or it’s legal argumentation. She might contend one of the following:

So at which court of law can this spouse contest the US's argument or the legality of its action, sue the United States or Obama or anybody else? Or is this a case in which whatever US says is the ultimate truth and any other court is therefore redundant?