As we’ve blogged before, adding the crime of aggression to the ICC Statute threatens to undermine the Court’s system of complementarity, which depends on domestic courts being the primary fora for adjudicating international crimes. Very few states have penalized the crime of aggression, but they may begin to do so in the event that the crime of aggression is added to the ICC Statute. Delegates involved in these negotiations should start focusing on what amendments to the complementarity provisions or other provisions might be appropriate to signal that aggression prosecutions need not go forward in domestic courts in the event that the Court eventually exercises jurisdiction over the crime.
This issue was central to the British House of Lords case of R. v. Jones, [2006] UKHL 16—one of the few domestic cases to consider the crime of aggression. (Article 14 of the Statute of the Iraqi High Tribunal includes the domestic crime of an analogous crime—“The abuse of position and the pursuit of policies that were about to lead to the threat of war or the use of the armed forces of 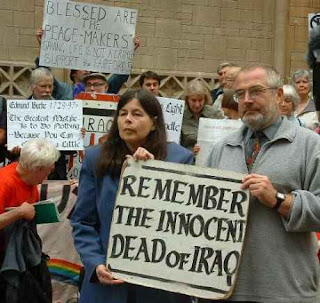 Iraq against an Arab country, in accordance with Article 1 of Law Number 7 of 1958.” Saddam Hussein was executed before these charges could be adjudicated).
The issue arose in Jones in a somewhat backward fashion. In 2003, several British subjects (including Margaret Jones, right) were arrested in connection with efforts undertaken at British military bases to impede British involvement in the Iraq War. The individuals were variously charged with, and some convicted of, aggravated trespass and criminal damage. The appellants all argued that under British law, they were entitled to use reasonable force to prevent the commission of a crime: the crime of aggression. Section 3 of the Criminal Law Act 1967 provides:

(1) A person may use such force as is reasonable in the circumstances in the prevention of crime, or in effecting or assisting in the lawful arrest of offenders or suspected offenders or of persons unlawfully at large. 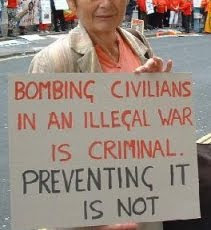 Appellants asserted that the United Kingdom’s actions in Iraq were unlawful and that they were thus justified in attempting to prevent them by the use of reasonable force. By their account, the crime of aggression was established in customary international law and its core elements understood with sufficient clarity to permit the prosecution of the crime. They argued that the defense should not be

restricted to crimes triable in the domestic courts and should be understood as extending to crimes recognised under customary international law.

Acknowledging the ongoing negotiations within the Special Working Group on the Crime of Aggression, the appellants stated that the absence of agreed provisions was primarily the result of disagreements over procedural matters, and did not negate the existence of a sufficiently defined prohibition of aggression in customary international law. Even though “the exercise of the prerogative in respect of foreign policy and deployment of the armed forces cannot be challenged in the courts,” the appellants argued that they should be entitled to rely on the illegality of the exercise of the Crown’s prerogative powers as a defense to criminal charges and to put to the jury the question of whether their actions were reasonable and proportionate in the face of an imminent crime.
In response, the Crown argued that there is no automatic incorporation of crimes of customary international law into the domestic law. Rather, such crimes require “statutory interposition.” In situations in which the state’s prerogative with regard to national security and foreign policy is at issue and is determinative, such matters remain outside the courts’ purview.
The Court of Appeals ruled, inter alia, that the crime of aggression was insufficiently defined under international law to trigger the application of the justification defense under the statute.
The House of Lords affirmed, but on different grounds. Lord Bingham of Cornhill determined that customary international law recognized the crime of aggression as evidenced by treaty practice since the 1920s, the Nuremberg and Tokyo proceedings, and the ICC negotiations. Lord

Hoffman (left, of Pinochet fame) reasoned that it was for Parliament to decide which international offenses should be made prosecutable in domestic courts and that the courts no longer possessed any residual power to create new offenses in the event of statutory gaps, no matter how pressing the public interest. Furthermore, he noted that the liability of individuals for the crime of aggression is secondary to the acts of a state. The courts should not inquire into the “discretionary powers” of the state to use force. Lord Mance in his speech noted that not all public international law crimes must, or should, be incorporated into the domestic penal code.
The Appeals were dismissed. Several of the appellants were allowed at trial to argue that they were seeking to prevent specific and codified war crimes from being committed, principally the release of cluster bombs and munitions tipped with depleted uranium. Last I was able to determine, the trials ended with hung juries and the defendants were slated to be retried.
In their speeches, the Lords recognized that since the early days of the International Law Commission’s Draft Code of Crimes Against the Peace and Security of Mankind, individual responsibility for the crime of aggression has been intrinsically and inextricably linked to the commission of aggression by a state. Thus, prosecuting the crime of aggression in domestic courts would necessarily involve those courts in non-justiciable inquiries into foreign policy/national security decisions to use force by the home or foreign states. Indeed, as a predicate to finding an individual liable for the crime of aggression, courts would have to declare an act of state to be unlawful. Creating a unique or inverse complementarity regime for the crime of aggression would avoid this. To date, delegates have not focused on this implication of expanding the Court’s subject matter jurisdiction to the crime of aggression, but they would do well to do so.

(Disclosure: I've been advising the Department of State on the aggression negotiations. Any views expressed here are my own).