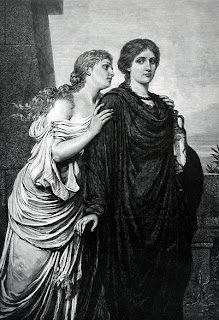 (IntLawGrrls is pleased to welcome back Ruthann Robson, who contributes this guest post regarding an article she's just posted at SSRN)

Antigone (near left) is a popular mythical, literary, and legal figure.
In addition to the Sophocles' play -- the 5th C. standard -- Antigone has inspired a 1943 work by French playwright Jean Anouilh, a 1999 version by Nigerian playwright Femi Osofisan, and a 2003 production by South African playwright Athol Fugard. In each of these plays, there are conflicting claims not only of justice, but also of the very naming of "Antigone." Although Anouilh has written (perhaps archly) that when one's name is Antigone there is only one part one can play, in fact Antigone plays many different parts and has many different names.
Yet can a name be appropriated?
In my new article entitled Democracy and Antigone, I've tried to reimagine Antigone as Sappho might have written her -- or as Sappho might have written Antigone's often neglected sister, Ismene (above, far left). (image credit)
This essay’s legal focus is several cases interpreting the meaning of mythical and Greek words:
► In San Francisco Arts & Athletics, Inc. v. United States Olympic Committee (1987), the U.S. Supreme Court decided that the term "Olympics" cannot be used by the Gay Olympics.
► A court in Athens, Greece, more recently decided that the term "Lesbian" can be used by women who are not residents of the island of Lesbos.
► And then there was the initial refusal of the trademark office to register "Dykes on Bikes" because it found "dykes" to be offensive.
The article further asks:
Are names different in democracy than in ancient aristocracies?
Jacques Derrida's work on democracy as based on brotherhood leaves little room for sisterhood, as he himself notes, and the present litigation practices of naming "brothers at the bar" have rarely extended to naming our "sisters at the bar."
The confluence of these two strands of literature and law invites further explorations of Sappho as a poet and historical figure, of Derrida’s work on democracy and brotherhood, and of the meaning of "sisterhood" in feminist and legal texts.