A difference a decade makes

Back in 1998, the political branches of the U.S. government seemed at one in fearing the power of an independent prosecutor for the International Criminal Court.
Then Ambassador-at-Large for War Crimes Issues in the administration of President Bill Clinton, David J. Scheffer, cautioned against permitting international prosecutors to act proprio motu -- on their own motion, as national prosecutors do -- for fear that it would

'encourage overwhelming the Court with complaints and risk diversion of its resources, as well as embroil the Court in controversy, political decision-making, and confusion.'

Meanwhile, Senator Jesse Helms (R-S.C.), Chair of the Foreign Relations Committee, complained that the proprio motu prosecutor would be

'accountable to no state or institution for his actions.'

Quite different tunes are to be heard from official Washington today, little more than a decade later. As the Office of the Prosecutor goes forward with its proprio motu investigation of post-election violence in Kenya, it can expect continued support from the United States.
Secretary of State Hillary Clinton made U.S. concerns about Kenya clear during a visit the country last August, when she

said that if the Kenyan government refused to set up a tribunal to prosecute the perpetrators of last year’s election-driven bloodshed, the International Criminal Court at The Hague would get involved.

It's no accident that those comments occurred in Kenya, birthplace of the father of President of the United States. Barack Obama made clear his concern about problems in Kenya in his 1st book, Dreams from My Father (1995), which our colleague Antony Anghie aptly dubbed "a story of the failure of the postcolonial state" in a keynote speech to the American Society of International Law keynote last week. Obama reiterated concern on the campaign trail. Giving voice to the Obama Administration's position, Clinton said in August:

'I have urged that the Kenyan government find the way forward themselves. But if not, then the names turned over to the I.C.C. will be opened, and an investigation will begin.'

And it has.
As IntLawGrrl Beth Van Schaack detailed, yesterday the ICC Pre-Trial Chamber gave the Office of the Prosecutor the go-ahead to investigate.
During her recent visit to the California International Law Center at King Hall, University of California, Davis, School of Law, ICC Deputy Prosecutor Fatou Bensouda praised the United States for its assistance in the Kenya and other matters. Just last week, in the ASIL keynote about which we've already posted, Harold Hongju Koh, Legal Adviser to the State Department, spoke with evident pride of the United States' re-engagement with the ICC by observer-status attendance at meetings of the Assembly of States Parties (including the forthcoming Review Conference in Kampala, Uganda). Koh said:

'The United States believes it can be valuable partner and ally,'

and he promised further U.S. support to the ICC.
All this is not to say that the position of the United States raises no eyebrows.
During Secretary of State Clinton's Nairobi visit last August, a university student asked "how the United States could support having the court intervene in Kenya's problems when the U.S. 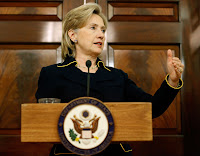 government has not subjected itself to its procedures." By way of reply Clinton expressed "'great regret'" about U.S. nonparty status, adding:

'But we have supported the court and continue to do so.'

A decade of difference, indeed.
by Diane Marie Amann at 5:15 AM

See Bill Schabas' take on the US & the ICC is at http://humanrightsdoctorate.blogspot.com/2010/03/international-criminal-court-on-wobbly.html.