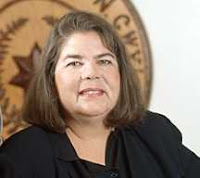 Wilma Mankiller (left) succumbed yesterday to pancreatic cancer at her home near Tahlequah, in eastern Oklahoma.
As we've posted, a quarter-century ago Mankiller "became the 1st woman Chief of a major Native American tribe." Her New York Times obituary, published today, credits her with "revitaliz[ing] the Cherokee Nation’s tribal government and improv[ing] its education, health and housing ..." (credit for 2005 photo)
She spoke often on issues affecting indigenous peoples; a video clip from a 2008 talk is here.
Mankiller was born 64 years ago in Tahlequah, the 6th of 11 children born to a Cherokee father and a Dutch-Irish mother. When she was 10 or 11,

the family moved to San Francisco as part of a relocation policy of the Bureau of Indian Affairs. Its aim was to move Indians off federally subsidized reservations with the promise of jobs in America’s big cities.

She spoke of the move this way in a 1993 NYT interview:

'I set out on what I call my own little Trail of Tears.'

In San Francisco, Mankiller married early and in her 20s was known as "Mrs. Hugo Olaya." But as we've posted, she became

politicized when she joined the occupation of Alcatraz. She then moved back to Oklahoma to apply her skills on behalf of her people. Reelected Chief once, Mankiller resigned in 1995 because of ill health.

Yesterday the current Cherokee leader said on the tribe's website:

'We are better people and a stronger tribal nation because of her example of Cherokee leadership, statesmanship, humility, grace, determination and decisiveness. When we become disheartened, we will be inspired by remembering how Wilma proceeded undaunted through so many trials and tribulations.'