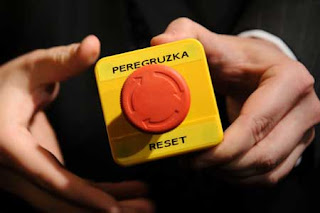 The same week as the release of a new U.S. nuclear strategy, a New Strategic Arms Reduction Treaty is to be signed in Prague Thursday by the Presidents of Russia and the United States.
Well known is the treaty's acronym, START. Or, to use the term preferred by the White House, New START. (Prior posts on nuclear policy are here, here, and here.)
"New START" marks a distinction from START I, a multilateral treaty due to expire toward the end of this year. START I had been negotiated before the fall of the Soviet Union; it entered into force thereafter, with Belarus, Kazakhstan, Russia, Ukraine, and the United States exchanging instruments of ratification in Budapest on December 5, 1994.
Another reason for preferring "New START": START II proved a bit of a false start. Signed in 1993 by U.S. President George H.W. Bush and Russian President Boris Yeltsin and fully ratified by 2000, the treaty never was implemented. As explained in a Moscow Times story yesterday,

The aim of START I was to reduce levels of "strategic offensive arms" -- including nuclear warheads and intercontinental ballistic missiles -- in 3 phases. At the end, Belarus, Kazakhstan, and Ukraine were to "have no strategic nuclear forces," while U.S. and Russian "strategic arsenals" were to be "reduced by 30–40 percent."
New START, announced a week ago Monday, is the result of protracted negotiations that included the Presidents' side meeting during Copenhagen, the December climate change conference. As described by former State Department official Stephen Sestanovich, now a Columbia diplomacy professor and a Senior Fellow at the Council on Foreign Relations the 2 countries have detailed in New START

cuts of hundreds of strategic nuclear warheads and delivery vehicles as the main lever of their so-called 'reset.'

(photo credit; and see here) Also key, according to the White House, is a "verification regime" that "will provide the ability to monitor all aspects of the Treaty."
Promising stuff, at least through signing. But then comes the ratification. Although Sestanovich is optimistic, some predict ratification difficulties Stateside:

[T]he Russian daily Kommersant reported that Russian President Dmitry Medvedev likely won't have difficulty getting the Russian Parliament to ratify the agreement, but U.S. President Barack Obama will have a harder time achieving the two-thirds majority needed for passage by the U.S. Senate [right].

Perhaps more than one new start is in order.
by Diane Marie Amann at 6:06 AM