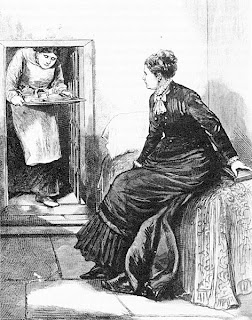 On this day in ...
... 1878, the woman known as Madame Restell committed suicide in her New York City home. Born into a laboring family in England on May 6, 1812, she'd worked as a maid and married as a teenager. Eventually she immigrated to the United States and, by 1831 a widow, remarried. Using the French pseudonym above, Ann Trow Lohman became wealthy marketing birth-control products, and "the term 'Restellism' became a euphemism for abortion." Her conduct led to many criminal prosecutions, as detailed in a number of books, reviewed here and here. (credit for 1878 newspaper illustration of Restell, far right, in a New York jail cell)