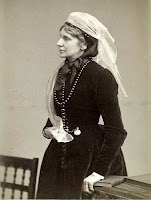 On this day in ...
... 1828, a 7th child, Josephine, was born into the Grey family (relatives of the Prime Minister who leant his name to Earl Grey tea) in Northumberland, England. In 1852 she married George Butler. Josephine Butler (right) had been a feminist since her 20s, and she and her husband were radicals for their times, opposing slavery and supporting the Union during America's Civil War. After the couple's only daughter died, Josephine began to do charity work. She's best known for her campaigns to improve the health and lives of prostituted children and women, by taking part in international campaigns against human trafficking and by eliminating laws that discriminated against prostitutes. Butler, who chronicled her work in a memoir entitled Personal Reminiscences of a Great Crusade (1896), died in 1906.