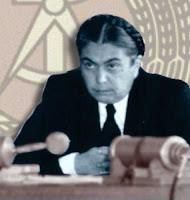 On this day in ...
... 1989, Hilde Benjamin (right), the 1st woman to serve as East Germany's Minister of Justice, died, 7 months before the fall of the Berlin Wall that would precipitate the reunion of her country with its western counterpart. Born Hilde Lange 87 years earlier, she became a lawyer, married Georg Benjamin (brother of the philosopher Walter Benjamin), and joined the Communist Party. As a judge in the era when East Germany lay within the Soviet bloc, she presided over many show trial convictions, and so earned the nickname "Blutige Hilde"; that is, "Bloody Hilde."