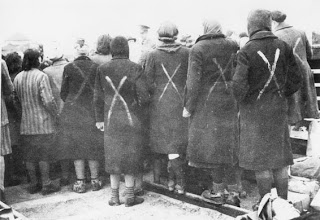 On this day in ...
... 1945 (65 years ago today), 7,000 women inmates of Ravensbrück concentration camp were turned over to the Swedish Red Cross, which brought them to be cared for in Sweden, a neutral country during World War II. (credit for photo showing chalk marks on back of prisoners selected to go to Sweden) The transfer resulted from negotiations between Swedish Count Folke Bernadotte and the head of the Nazi SS. Within days the SS would evacuate 15,000 other inmates on a forced death march. At month's end Soviet troops would liberate the camp, finding still there as many as 3,000 sick and dying inmates. In its 6 years of existence, the eastern Germany camp had housed more than 120,000 prisoners, all but 20,000 of whom were women; tens of thousands died there. Many others were subjected to medical experimentation, for which some officials would, as we've posted, stand trial at Nuremberg and elsewhere.
(Prior April 23 posts are here, here, and here)
by Diane Marie Amann at 4:04 AM