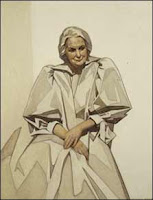 On this day in ...
... 1922, Jeanne Mathilde Sauvé (left) was born in Prud'homme, Saskatchewan, Canada. After attending university in Ottawa and Paris, she became a journalist, then, on the urging of her husband, entered politics and was elected to Canada's Parliament. (credit for portrait circa 1989-90) In 1972 she became the 1st woman living in Québéc to serve in the federal Cabinet, 1st as Minister for Science and Technology, then Minister of the Environment, and finally Minister of Communications. "[S]he was the first woman elected as Speaker of the House of Commons, she opened the first daycare on Parliament Hill, and she was the first woman to serve as Governor General" of Canada. (That last post is currently held, as we've posted, by another woman, Haiti-born Canadian Michaëlle Jean.) A "staunch advocate of issues surrounding youth and world peace," and a promoter of those issues in Canada and in the United Nations, Sauvé, who died in 1993, incorporated the dove of peace into her official coat-of-arms.