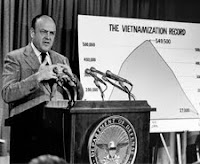 On this day in ...
... 1969, Melvin Laird (left), the Secretary of Defense, described the United States' plan to "'Vietnamize'" the war that it had waged in Indochina for years. Laird thus confirmed that the government was moving "to lessen the burden on the United States in terms both of lives and dollars," but he declined to give any "'unilateral withdrawal-of-troop figures.'" Laird further announced "that secret talks aimed at settling the Vietnam war were under way" between South and North Vietnamese factions, and that they "had shown 'some sign of progress.'" (credit for (c) photo, published in Laird's memoir, With Honor (2008))