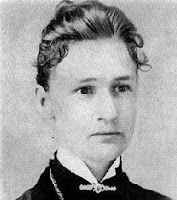 On this day in ...
... 1887, Argonia, Kansas, a "little Quaker village, with a population of less than five hundred," became the community in the United States that 1st elected a woman as mayor. Elected was Susanna Madora Salter (left), then 27, the daughter of the town's 1st mayor, and the wife of its city clerk. The convoluted process by which she was elected is detailed here. In the single year that she served before declining to seek re-election, Salter became world famous -- so much so that when she was introduced to Susan B. Anthony at a women's suffrage meeting, the latter "slapped her on the shoulder and exclaimed":

'Why, you look just like any other woman, don't you?'