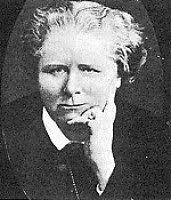 On this day in ...
... 1904, Frances Power Cobbe (right) died in Hengwrt, Wales, 81 years after her birth at Newbridge House, the County Dublin estate of her "prominent" Anglo-Irish family, which "included no fewer than five archbishops" of the Anglican church. She herself became "one of the most influential figures in the British Unitarian movement of her day." In her mid-30s Cobbe began a 3-1/2-decade career as a teacher at a Bristol, England, school, founded by Mary Carpenter to educated "girls released from prison, inmates of work houses, prostitutes, and other unfortunates." An important feminist writer and suffragist, Cobbe is perhaps best known today for her campaigns against animal cruelty. Among the groups she founded was the British Union for the Abolition of Vivisection, still in operation via the acronym BUAV, 111 years later.