An International Court of Justice decision issued this week has prompted a call for establishment of an international environmental tribunal.
Argentina had filed an application with the ICJ, based in the Peace Palace at The Hague, Netherlands (left), in 2006. It sought to hold its eastern neighbor responsible for paper factories' pollution of the river that forms a border between the 2 countries. In Tuesday's judgment, captioned Case Concerning Pulp Mills on the River Uruguay (Argentina v. Uruguay), Argentina, for the most part, lost out:
► An 11-3 majority of the ICJ declined to find that Uruguay had breached "substantive obligations" contained in the Statute of the River Uruguay, a 1975 treaty between the countries.
► A 13-1 majority did reproach Uruguay for failing to discuss with Argentina plans for 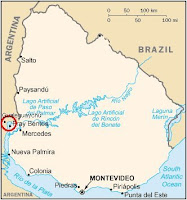 construction of the mills, located in the circled area at right. (map credit) This failure was deemed a breach of "procedural obligations" contained in that Statute. But as for remedy, "the declaration by the Court of this breach constitutes appropriate satisfaction," the majority wrote at ¶ 282.
(Dissenting from the 1st ruling, against Argentina, were Judges Awn Shawkat Al-Khasawneh of Jordan and Bruno Simma of Germany, as well as Judge ad hoc Raúl Emilio Vinuesa of Argentina. The lone dissenter from the 2d ruling, against Uruguay, was Judge ad hoc Santiago Torres Bernárdez of Uruguay.)
A Le Monde article by Stéphanie Maupas observed that this judgment in Pulp Mills marked the latest in a string of ICJ decisions implicating environmental law. Others have included:
►Nuclear Tests (New Zealand v. France) and Nuclear Tests (Australia v. France), both issued in 1974;
► Gabčíkovo-Nagymaros Project (Hungary/Slovakia) (1997), involving a hydroelectric plant on the Danube River; and
►Aerial Herbicide Spraying (Ecuador v. Colombia), a pending case arising from anti-drugs campaigns against coca plantations.
Why the assertion of a need for a new adjudicative body, given the possibility of suits not only in the ICJ, but also in the International Tribunal for the Law of the Sea, headquartered in Hamburg, Germany?
Perhaps it has something to do with the report that although Argentina and Uruguay professed satisfaction with the ICJ's judgment, Argentine environmental activists "are refusing to give up their fight" and "raising the possibility of a violent confrontation if Argentine police have to intervene" to end the activists' blockade of the river's main bridge.
Maupas' article noted that in fora like the ICJ and ITLOS,

[O]nly nation-states may be parties. There exists no international tribunal concerned specifically with the environment. Accordingly, neither the December 1984 catastrophe in Bhopal, India, nor the April 1986 disaster in Chernobyl, Ukraine, were the subjects of proceedings at the international level, and the victims, supported by nongovernmental organizations, still clamor for their right to justice. 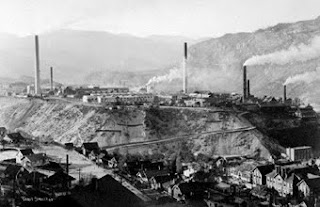 Michel Prieur, of the Commission on Environmental Law of IUCN, the International Union for Conservation of Nature (prior IntLawGrrls post), contended that a forum in which individuals may litigate is needed in order to advance development of an international jurisprudence by which the environment is protected as a common good. In words evocative of Trail smelter (left) (photo credit), an arbitral chestnut, the Le Monde article quoted Prieur:

'States must conduct their activities in a way that does not contaminate their neighbors.'

After this was posted, our colleague Cymie R. Payne (California-Berkeley) published an ASIL Insight on the Pulp Mills decision; see http://www.asil.org/insights100422.cfm.