(1 in a series of IntLawGrrls' Kampala Conference posts)

Serendipity led me this month finally to read Victors' Justice.
Over the years I'd often given it the Washington read -- the flip through the index to pinpoint selected passages -- and cited it a 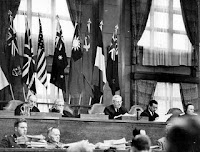 ccordingly (e.g., here and here). After all, this 1971 work by Amherst History Professor Richard H. Minear stands as a landmark critique of the post-World War II trial of Japanese leaders before the International Military Tribunal for the Far East (above left).
The serendipity of my close read this month surfaced as early as page xi.
In the preface penned in May 1971 -- when controversy over the Vietnam War was seething -- Minear endorsed prosecution for "conventional war crimes" like those committed 3 years earlier at My Lai (additional post). Minear also supported holding "at least two American presidents and their civilian and military advisors" accountable for tactics deemed "of

highly dubious legal character" by no less a figure than retired Brigadier General Telford Taylor (right), a former top U.S. Prosecutor before the International Military Tribunal at Nuremberg and author of Nuremberg and Vietnam: An American Tragedy (1970). Yet Minear warned against any court going any further:

But when the issue is not conventional war crimes but aggression, when it is the whole course of American policy and indeed the history of Indochina and East and Southeast Asia, then I must demur.

Minear's demurrer brought immediately to mind the 2-week International Criminal Court Review Conference set to begin tomorrow in Kampala, Uganda. As detailed in the superb series that IntLawGrrl Beth Van Schaack launched last year, among the key action items that the ICC Assembly of State Parties will take up at Kampala are, 1st, whether to define the "crime of aggression" enumerated in Article 5 of the ICC Statute and, 2d, whether to make that definition operational, thus authorizing the ICC to punish individuals found guilty of the offense.
Supporters of international criminal justice have divided on these questions.
► Among the staunchest advocates of a "Yes" approach is another U.S. prosecutor at Nuremberg, Benjamin B. Ferencz (below right), who wrote in a March 2010 letter published online:

[T]he lock which now exists preventing aggressors from being tried must be removed from the courthouse door. Failure to make 'the supreme international crime' punishable by the ICC would, in fact, be a repudiation of the Nuremberg Principles and the rule of law. It would be a step backward instead of forward.

► Among several experts who answer "No" is former South Africa Constitutional Court Justice Richard Goldstone (below left), who served as the 1st Prosecutor at the International Criminal Tribunals for Rwanda and for the former Yugoslavia. In an International Herald Tribune op-ed published last week (hat tip), Goldstone wrote: 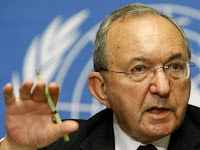 Grappling with aggression now also threatens to open rifts among members of the Court. Despite years of complex negotiations, deep disagreements persist over key issues related to amending the statute on aggression, such as state consent and how cases would be initiated. Attempting to force a decision absent consensus would vitiate one of the strongest assets the Court has had — the solidarity of it members in the face of efforts to undermine the project.

In Victors' Justice -- self-avowed "political scholarship" (p. xiii) written decades ago -- Minear cited other considerations that counsel an ICC "No" vote this year.
► Minear doubted that any criminal tribunal could make a record sufficiently close to the truth about responsibility for starting a war, even as he allowed that for a court to "come closer to the truth" than the Tokyo Tribunal did in its 1948 judgment "would be child's play." (p. xi) (Skepticism about the assignment to international criminal tribunals of a truth-telling function has inspired my own scholarship; see, e.g., pp. 132-33 here.)
► Minear further contended that the pursuit of convictions for aggression -- not for atrocities committed during conflict, but rather for "the war itself" -- would have little utility beyond being "politically convenient and satisfying." (p. xi) He expanded on the political aspects of proceeding against persons who lost World War II:

The reverse of the coin of enemy criminality was the rightness of the course pursued by the Allies in the same years. The trials were designed not only to punish wrongdoers but also to justify the right side, our side.

(p. 13) The distance between those designs and the traditional goals of criminal justice reveals the condemnation implicit in Minear's contention.
What's more, the villainization of 1 side via an aggression prosecution could diminish a prosecutor's appetite to pursue perpetrators of atrocities on all sides. (Any such risk simply compounds the problems of randomness and selectivity, discussed here at pp. 116-17, that are endemic to international criminal justice.) Post-World War II examples of this risk may be found in -- to cite Taylor's 1992 memoir, The Anatomy of the Nuremberg Trial -- the Nuremberg indictment of Germans for atrocities at Katyn that in fact were committed by troops of an Allied country, as well as the absence of judicial scrutiny of Allied bombing efforts in Europe and Japan alike. (Minear too treated the latter; see pp. 99-102.) More recent are allegations that ad hoc tribunals have concentrated overmuch on crimes by members of disfavored groups, such as the Serbs and the Hutu, and not enough on the crimes of those groups' rivals.
► Minear detailed concerns like these throughout the couple-hundred pages of his book. His litany supported the policy conclusion that he articulated as early as p. xi:

The Tokyo trial is a bad precedent, bad enough, I suggest, to cast doubt on the Nuremberg precedent as well. The wiser course would be to return to the international law of the period before 1945, when atrocities were considered justiciable but the issue of aggression was not.

Minear's arguments retain force today, 39 years to the month after they were written. Still valid too are concerns underlying Minear's work: revulsion against the evils of warfare, coupled with distaste for the threat that the reality of politicization poses to the meaning of justice. It shows that one may be against aggression in a double sense; that is, against individual criminal prosecution of aggression even while remaining steadfastly against the commission, by individual, state, or nonstate entity, of aggression.
Thus does Minear's conclusion back then suggest a "wiser course" for the ICC right now:
Focus not on assessing the criminality-or-not of a given conflict, but rather on assuring the proper criminal punishment of persons responsible for the world's worst offenses.