Arrests of Guatemalans in U.S. accused of massacre: beginning of a new trend?

Yesterday the U.S. Immigration and Customs Enforcement (ICE) and the Justice Department announced that they had arrested Gilberto Jordán, a former member of an elite army unit known as kaibiles, for lying on his immigration forms about his participation in a 1982 massacre. Two more former officials had also settled in the U.S. and are being sought. A fourth man, Santos Lopez Alonzo, pled guilty to illegally entering the country; he was fined $10 and is due to be deported.
The massacre, in a remote northern village known as the Dos Erres, was part of a campaign by the army against perceived opposition to military rule. While most of the victims of the military campaigns were Mayan, Dos Erres was a mixed settlement of recent immigrants to the zone. They had left insufficient land plots in the highlands to move to a settlement on the agricultural frontier, but in December 1982 they were targeted as potential guerrilla sympathizers. The army surrounded the town, rounded up the townspeople and divided them into groups of men and women. As Gilberto Jordán admitted to the authorities, he started the killing by throwing a baby down the town well, still alive. Next the women were raped, killed and thrown down the well, followed by the men. In all, there were 251 villagers killed. (credit for photo above right of clothing of children killed in the Dos Erres massacre)
Jordán had been living in the U.S. since 1999, and had become a naturalized citizen without mentioning his participation in the massacre in his application. The other two suspects are Jorge Vinicio Sosa-Orantes of Riverside, California, and Pedro Pimentel-Rios of Santa Ana, California. Sosa-Orantes was a lieutenant at the time. In the U.S. he worked as a martial arts instructor. Pimentel-Rios, accused by witnesses of raping young girls before killing them, moved to the U.S. after a career that included a stint at the U.S. School of the Americas. More on the defendants can be found here. The Dos Erres massacre has become an emblematic case of Guatemala’s culture of im

punity. It’s not that there’s a lack of evidence: two other elite soldiers confessed and provided eyewitness evidence in the case, and one survivor who, at age 5, witnessed his family’s murder before being taken as a domestic slave by López Alonzo. That man, Ramiro Cristales, has agreed to testify in the case and, along with the repentant soldiers, is now in hiding. The problem is that the case has languished in the Guatemalan courts for years. Every time there was any movement, lawyers for the defendants would file motions, called amparos, that had the effect of paralyzing the proceedings. One of the claims was that the case was covered by the country’s 1996 amnesty law.
Fed up, lawyers for family members of those killed went to the Inter-American Commission for help. The Commission found that Guatemala had violated the rights of the victims to redress and judicial process, and the Court, in 2010, agreed. It ordered the Guatemalan state to quit stalling and remove legal obstacles to prosecution, and to press forward with exhumations of the remains of the dead and other pre-trial procedures. In February, 2010, the Guatemalan Supreme Court held that the amnesty law did not apply, and that the lower courts should refuse to countenance any more dilatory motions and should get on with the business of amassing evidence and hearing the case. Since then, the Prosecutors’ office has announced that it is moving forward on the case, although a highly-contested process for election of the chief prosecutor may complicate things.
In this context, U.S. authorities have a number of choices for dealing with those arreste

d. They could, as is usually the case when those suspected of war crimes, torture, genocide or crimes against humanity, simply deport those who are non-citizens back to Guatemala. Unless such deportations are coordinated carefully with the Guatemalan prosecutors’ office so that the suspects are detained on arrival in Guatemala, however, deportation is simply a get out of jail card, as the suspects will disappear and never be tried. This has been the unfortunate outcome in the past. Or they could arrange for deportations to be carefully coordinated and get assurances from Guatemalan prosecutors that they will take over prosecution under international standards. Another option, especially for naturalized U.S. citizens, is to charge them with visa fraud for non-disclosure of their actions. This carries a potential ten-year prison term, at which point they could be deported back to Guatemala. This provision is already being used to strip former Salvadoran Defense Minister Garcia of his citizenship. While not ideal in terms of either the symbolic value or the length of sentence, fraud charges are no doubt easier to prove and less fraught than the underlying crimes.
Finally, U.S. authorities could charge the suspects with the underlying crimes and try them here. U.S. law provides jurisdiction for torture, genocide, slavery or recruitment of child soldiers when the offender is found in the U.S., no matter what his nationality or where the crime occurred. The section on torture was used to prosecute “Chuckie” Taylor, former Liberian president Charles Taylor’s son, who in 2009 was convicted and sentenced to 97 years in prison. It has not been more widely used because prosecutors have been loath to take on cases where the acts occurred prior to 1994, when the statute was enacted. As a matter of international law, this interpretation is incorrect: according to Article 15 of the International Covenant on Civil and Political Rights, there is no ex post facto problem when the behavior at issue has been criminalized in national or international law. Genocide, slavery and systematic torture have long been recognized as international crimes.
At this point, whether trial in Guatemala or in the U.S. is the best alternative depends on how seriously the Guatemalan prosecutors’ office seems to be in matching actions to their professed intentions to pros 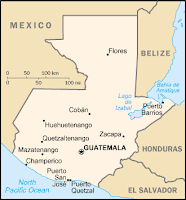 ecute the case at home. The U.S. should not give up the suspects without negotiating serious guarantees that they won’t just be mysteriously “sprung” from a local jail. If the choice is to prosecute here for visa fraud, U.S. authorities should seek ways to put the underlying facts of the massacre before the court, and to allow massacre victims some degree of participation and observance of the proceedings. The U.S. should also seek to collaborate with the Spanish judicial authorities, who are investigating the related case of genocide in the Spanish courts. Information and witness sharing, especially about military methods, training and objectives, could be useful in both cases. The Dos Erres case could become a symbol not only of horror, but of international prosecutorial and judicial cooperation and of a real commitment to finally make the U.S. “no safe haven” for war criminals.