A New START, but disarmament is still at the starting line 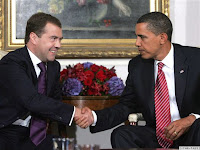 The “Treaty Between the United States of America and the Russian Federation on Measures for the Further Reduction and Limitation of Strategic Offensive Arms,” more commonly known as the New START (prior IntLawGrrls post), could have earned any of a variety of other possible nicknames: post-START, START’s successor, START follow-on. How appropriate that the current administration is calling this treaty, signed on April 8 of this year, what it is: a modest new start to a process that began over two decades ago during the administration of President Ronald Reagan, who, like President Barack Obama (above, far right), publicly aspired to a world free of nuclear weapons. (photo credit)
The United States and Russia could have progressed to much deeper cuts in their nuclear arsenals over that time. Instead, inattention to arms control and missed opportunities in those intervening years turn what would otherwise seem like a small step of restarting a 20-year-old process into a laudable achievement.
In terms of reducing nuclear armaments, New START is rather a “modest step,” as many have observed (e.g. former Secretary of Defense William J. Perry and former Secretary of State George P. Shultz, here, and Stanford’s Pavel Podvig, here. The ceiling on deployed nuclear warheads in new START is 1,550, compared to 6,000 in START and 1,700-2,200 in the Moscow Treaty, which was signed on May 24, 2002. But much of that purported reduction had either already occurred as of signing or will be achieved through different counting methods rather than actual destruction of weapons.
New START is not so very different from the original START. Comparison of New START with the original, START I, reveals:
► 12 of New START’s 16 articles borrow heavily from its parent.
► START was nearly twice as long as New START and more complicated, creating cumbersome inspection and verification regimes and rules that had come under bilateral derision toward the end of its life.
► Some of START I's complexity has been left out of the new treaty regime entirely. For example, Article VI of START I, relating to “restricted areas” and the number of structures that each covered facility could include. A Fact Sheet of the State Department touts this simplicity, referring to New START as including

a verification regime that is adapted from START, but is simplified, less costly to implement, and tailored to the specific provisions of the new Treaty.

► New START, for all the brevity and simplicity of the 16 Articles of the Treaty’s text, relies on a lengthy Protocol, plus Technical Annexes to that Protocol. As the White House explained:

The Protocol and Annexes will be integral parts of the Treaty and thus submitted to the U.S. Senate for its advice and consent to ratification.

When considered as a whole, New START with its Protocol and Annexes may not fall so short of the original in its length and bulk.

So why did the task of slightly simplifying a 20-year-old treaty and making modest moves toward disarmament present such a challenge that old START’s expiration date came and went without the successor treaty being concluded?
Dmitry Medvedev, Russia's President, commented after the signing of New START:

'Just a couple of months ago, (this) looked like mission impossible.'

The difficulty lay not in the challenge of the task itself, but in the strained relations between the United States and Russia at the end of the Bush administration. The expiration of the START I treaty on December 5, 2009, was not unforeseen throughout its 15-year lifetime. To the contrary, it was apparent in the plain language of the treaty's expiration provision, Article XVII.
Yet the Bush administration:
► Dithered over what the desired successor agreement should look like,
► Placed missile defense as its sole priority in the area,
► Unilaterally withdrew from the Anti-Ballistic Missile Treaty in 2001, and
► Downgraded the bureau within the State Department that was responsible for arms control, even removing the phrase “arms control” from all titles and names.
All of this left the Obama administration severely handicapped in the race to reach a successor agreement within the president’s first year in office.
That New START has been signed within only a few months after START’s expiration is thus a significant achievement.
The United States can lead by example, asking other countries to honor their obligations under the Nuclear Non-Proliferation Treaty, or NPT. Possessing 95 percent of the world’s nuclear weapons, the United States and Russia bear primary responsibility for fulfilling Article VI of the NPT:

to pursue negotiations in good faith on effective measures relating to … nuclear disarmament.

U.S. neglect of that responsibility in the past has been used to excuse non-nuclear-weapons states from their responsibilities under the NPT not to acquire nuclear weapons.

Headed by Secretary of State Hillary Clinton, the United States' delegation will arrive tomorrow at the 2010 Review Conference of the Parties to the Treaty on the Non-Proliferation of Nuclear Weapons at U.N. headquarters in New York with a strengthened hand. (credit for March 2010 photo of Clinton arriving in Moscow for negotiations above left; credit for U.N. photo above right) That hand includes:
► New START,
► the recent release of the administration’s Nuclear Posture Review, and
► the United States' hosting last month of a 2-day Nuclear Security Summit in Washington, D.C.
Next step:
(Hopefully), Senate ratification of New START.
And beyond that:
(Hopefully), with a shorter horizon of 10 years for expiration of New START, more earnest steps toward real disarmament during the lifetime of the treaty.
by CarrieLyn Donigan Guymon at 5:05 AM