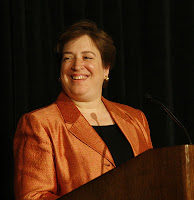 Assuming the Senate confirms Solicitor General Elena Kagan (right) following hearings set to begin June 28, 33% of U.S. Supreme Court Justices will be women.
We have never had so many women on the Court before. (Prior IntLawGrrls post.)
But does the sex of the Justices matter? Would Kagan make the Highest Court somehow more legitimate? What exactly is the relationship between sex representativeness and the legitimacy of the Court? How might the presence of groups traditionally underrepresented on the Court affect perceptions of the Court’s authority and the soundness of its rulings?
The presence of women judges may affect legitimacy, if women decide cases differently from men.
In a 2009 New York Times interview, Justice Ruth Bader Ginsburg proposed that the presence of women judges 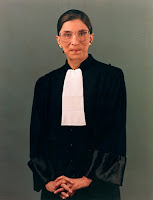 made it possible for the courts to appreciate earlier than they might otherwise that sexual harassment belongs under Title VII [as a violation of civil rights law].

Ginsburg (left) also has admitted that her womanly perspective affected her legal analysis of the strip search of 13-year old Savana Redding in Safford Unified School District v. Redding (2009).
Empirical studies seem to back up Justice Ginsburg’s claim:
► According to then-student Jennifer L. Perisie, author of the 2005 Yale Law Journal Note entitled “Female Judges Matter: Gender and Collegial Decision-Making in the Federal Appellate Courts,” plaintiffs in sex discrimination or sex harassment cases were twice as likely to prevail if at least one woman judge sat on the federal appellate panel reviewing their cases.
► A 2007 Stanford Law Review study, of which IntLawGrrl Jaya Ramji-Nogales was a co-author, found that in asylum cases, the gender of the judge appeared to be an important factor. Men granted asylum at a rate of 37.3%, women at a rate of 53.8%; that is, 44% more frequently than their male counterparts. (Prior IntLawGrrls posts here and here.)
► Similarly, a 2009 Washington University Law Review study showed that African American and White judges decide racial harassment cases differently. (“Myth of the Color-Blind Judge: An Empirical Analysis of Racial Harassment Cases,” by Pittsburgh Law Professor Pat K. Chew and Carnegie Mellon Business Professor Robert E. Kelley.)
Although judicial decision-making might vary by sex and race, the inclusion of traditionally underrepresented groups does not necessarily increase legitimacy. The presence of the underrepresented group must improve the Court’s decision-making. In other words, we have to

believe the Court’s decisions are substantively better because “a wise Latina”, to quote Justice Sonia Sotomayor (right), sits on the bench. Inclusion affects legitimacy if we believe many different kinds of Justices around one conference table are more likely to produce a Just result.
The link between legitimacy and inclusion may also be tied to aspirations of the general population (or maybe just the empowered parts of the population) for representativeness on institutions important to our democracy. We simply want to see women -- or not only men -- sitting on the bench, and we question the legitimacy of a body that renders important decisions without them. Maybe we’ve reached a point in our development as a nation where, as Justice Ginsburg put it when she became the sole woman on the Court, “[i]t just doesn’t look right” to have only one woman on the Court.
But what about international courts? 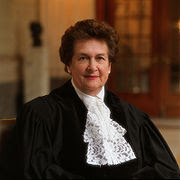 Consider the 65-year-old International Court of Justice. Rosalyn Higgins (left), who retired in 2009, is the only woman ever to have served as a permanent ICJ judge. It remains to be seen if women will be considered to fill any upcoming vacancy.
Similarly, the International Tribunal for the Law of the Sea has never had women judges. Only four women serve on the twenty-six member bench of the European Court of Justice, while they make up a mere 14% of the four-year-old African Court on Human and Peoples' Rights. (Among them is Judge Sophia A.B. Akuffo of Ghana (below right), Vice President of that court.) Only 6% of arbitrators in

cases at the International Centre for the Settlement of Investment Disputes were women. Women participate at higher rates on most international criminal courts and regional human rights courts, but only one court – the International Criminal Court – has reached 50% participation. (Although not international courts, the International Law Commission and the Inter-American Juridical Committee also are bodies in which notoriously few women participate.)
To borrow from Justice Ginsburg, does this “look right”?
Perhaps the debate in the United States can reignite our efforts to better understand what is happening at the international level. Why are women being left behind on most of the world’s most important international courts? What does it tell us about the legitimacy of these increasingly important institutions? I am tackling these questions in my own scholarship, and invite you to join me in considering them.
by Nienke Grossman at 5:05 AM

Thus, to argue for gender or ethnic or some other representativeness assumes a lack of objectivity in adjudicators. In other words, it assumes bias. Maybe an intellectual hang-up that prevents people from acknowledging the need for broad representation could this uncomfortable assumption of built-in bias, so contrary to what I perceive as the more traditional notions of judicial virtue.