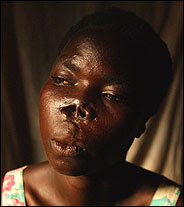 KAMPALA, Uganda – As we finalize the first day of the ICC Review Conference here, it is worth highlighting an important piece of new legislation of particular relevance to our work here. On May 24, 2010, President Obama signed into law the Lord's Resistance Army Disarmament and Northern Uganda Recovery Act of 2009. His signing statement is a moving tribute the importance of accountability for atrocities committed in Uganda (picture credit) and is worth quoting here in full:

Today, I signed into law the Lord's Resistance Army Disarmament and Northern Uganda Recovery Act of 2009. The legislation crystallizes the commitment of the United States to help bring an end to the brutality and destruction that have been a hallmark of the LRA across several countries for two decades, and to pursue a future of greater security and hope for the people of central Africa.

The Lord’s Resistance Army preys on civilians – killing, raping, and mutilating the people of central Africa; stealing and brutalizing their children; and displacing hundreds of thousands of people. Its leadership, indicted by the International Criminal Court for crimes against humanity, has no agenda and no purpose other than its own survival. It fills its ranks of fighters with the young boys and girls it abducts. By any measure, its actions are an affront to human dignity.

Of the millions affected by the violence, each had an individual story and voice that we must not forget. In northern Uganda, we recall Angelina Atyam’s 14-year old daughter, whom the LRA kidnapped in 1996 and held captive for nearly eight years -- one of 139 girls abducted that day from a boarding school. In southern Sudan, we recall John Loboi -- a father, a husband, a brother, a local humanitarian assistance worker killed in an ambush while helping others in 2003. Now, in the Democratic Republic of the Congo and the Central African Republic, the people of Dungu and of Obo, too, have their stories of loss and pain.

We mourn those killed. We pray for those abducted to be freed, and for those wounded to heal. We call on the ranks of the LRA to disarm and surrender. We believe that the leadership of the LRA should be brought to justice.

I signed this bill today recognizing that we must all renew our commitments and strengthen our capabilities to protect and assist civilians caught in the LRA’s wake, to receive those that surrender, and to support efforts to bring the LRA leadership to justice. The Bill reiterates U.S. policy and our commitment to work toward a comprehensive and lasting resolution to the conflict in northern Uganda and other affected areas, including northeastern Democratic Republic of Congo, southern Sudan, and the Central African Republic. We will do so in partnership with regional governments and multilateral efforts.

I commend the Government of Uganda for its efforts to stabilize the northern part of the country, for actively supporting transitional and development assistance, and for pursuing reintegration programs for those who surrender and escape from the LRA ranks.

I also want the governments of other LRA-affected countries to know that we are aware of the danger the LRA represents, and we will continue to support efforts to protect civilians and to end this terrible chapter in central African history. For over a decade, the United States has worked with others to respond to the LRA crisis. We have supported peace process and reconciliation, humanitarian assistance and regional recovery, protection of civilians and reintegration for former combatants, and have supported regional governments as they worked to provide for their people’s security. Going forward, we will call on our partners as we all renew our efforts.

I congratulate Congress for seizing on this important issue, and I congratulate the hundreds of thousands of Americans who have mobilized to respond to this unique crisis of conscience. We have heard from the advocacy organizations, non-governmental organizations, faith-based groups, humanitarian actors who lack access, and those who continue to work on this issue in our own government. We have seen your reporting, your websites, your blogs, and your video postcards -- you have made the plight of the children visible to us all. Your action represents the very best of American leadership around the world, and we are committed to working with you in pursuit of the future of peace and dignity that the people of who have suffered at the hands of the LRA deserve.