I recognize that Arizona has become a widening entry point for illegal immigration from the South. The wave has brought with it rising violence and drug smuggling.
But a solution that degrades innocent people, or that makes anyone with broken English a suspect, is not a solution. A solution that fails to distinguish between a young child coming over the border in search of his mother and a drug smu 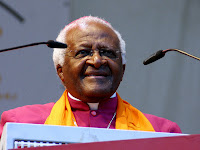 ggler is not a solution. . .
Abominations such as apartheid do not start with an entire population suddenly becoming inhumane. They start here. They start with generalizing unwanted characteristics across an entire segment of a population. They start with trying to solve a problem by asserting superior force over a population. They start with stripping people of rights and dignity - such as the right to be presumed innocent until proven guilty - that you yourself enjoy. Not because it is right, but because you can. And because somehow, you think this is going to solve a problem.
However, when you strip a man or a woman of their basic human rights, you strip them of their dignity in the eyes of their family and their community, and even in their own eyes. An immigrant who is charged with the crime of trespassing for simply being in a community without his papers on him is being told he is committing a crime by simply being. He or she feels degraded and feels they are of less worth than others of a different color skin. These are the seeds of resentment, hostilities and in extreme cases, conflict.

-- Bishop Desmond Tutu, in an editorial in last week's Huffington Post, discussing Arizona's harsh new immigration law (prior post) -- a fitting reflection on this Cinco de Mayo.
by Jaya Ramji-Nogales at 1:11 AM