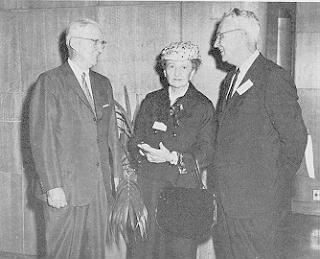 On this day in ...
... 1965 (65 years ago today), Frances Perkins died 85 years after she'd been born Fannie Coralie Perkins in Boston, Massachusetts. In the last decade of her life Perkins, holder of an M.A. in social economics from Columbia University, served as a member of the faculty of the School and Industrial Relations at Cornell. She's best known, however, for having served as President Franklin Delano Roosevelt's Secretary of Labor -- and so as the 1st woman Cabinet member in the United States. Perkins helped spearhead the United States' entry into the International Labour Organization. Among many other achievements, this feminist, labor activist, and settlement house worker "was also the principal architect of the Social Security Act." (credit for 1960 photo of Perkins, center, at event honoring the Act's 25th anniversary) She's also a foremother of ours, thanks to the nomination by IntLawGrrl Janie Chuang.