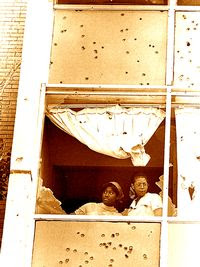 On this day in ...
... 1970 (40 years ago today), 2 persons lay dead and another 12 were wounded at Jackson State in Mississippi by the early hours, following a nighttime demonstration in which officers had aimed "a heavy, constant barrage of gunfire" at a women's dormitory, (credit for photo of 2 women looking out of the bullet-ridden dormitory soon after the fusillade) The deaths of Phillip Lafayette Gibbs and James Earl Green occurred one of many protests related to civil rights and antiwar issues on college campuses across the United States that spring; indeed, the killings of 4 demonstrators at Ohio's Kent State had taken place fewer than 2 weeks earlier. No prosecutions ensued, though the report of a presidential inquiry commission stated (p. 450) that the gunfire was "an unreasonable, unjustified overreaction."