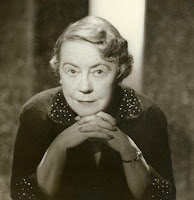 On this day in ...
... 1882 (or, perhaps, 1880), a daughter, Elizabeth Anne, was born in England to American parents. Educated in Ohio, she married an engineer/importer, whom she accompanied on many overseas trips. Eventually she "timidly" asked a New York Times editor whether she might send dispatches during a 1921 trip; her consequent reports got Anne O'Hare McCormick a job:

She ... impressed him, particularly with her judgment of Mussolini, when she wrote: 'Italy is hearing the master's voice.' Other correspondents were then giving him the brush-off as a posturing lout. She was hired.

(A 1921 dispatch on Italy by her is here.) Thus was launched a journalism career in which O'Hare McCormick (above right) (credit) wrote about leading world events and became, in 1936, the 1st woman on The Times' editorial board. She was a Chevalier of the French Legion of Honor, and a U.S. delegate to the 1946 and 1948 UNESCO conferences. O'Hare McCormick died in New York in 1954, at age 72.