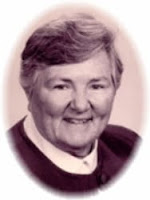 On this day in ...
... 2008, Sister Catherine Mulkerrin (left) died from cancer in Framingham, Massachusetts, 72 years after her birth in the same state. (photo credit) She'd entered the sisterhood at age 18, working 1st as a teacher and eventually becoming the leader of her order, the Sisters of St. Joseph, and chair of the New England Regional Leadership Conference of Women Religious. "She reinforced her order’s commitment to the poor and spoke out forcefully on behalf of the order against nuclear arms proliferation." As assistant director from 1992-94 of the Archdiocesan Office for Victims of Abuse -- years before abuse became a global scandal (prior post) -- Sister Catherine had urged leaders of Boston's Roman Catholic Church "to warn parishioners about priests who had been accused of sexually abusing children." In a later deposition she said of decisions to return the accused to parishes: