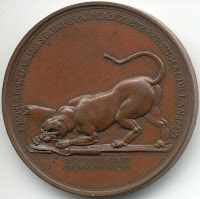 On this day in ...
... 1803, the year-old Treaty of Amiens, which aimed to bring peace between Britain and France, was broken when Britain refused to withdraw its troops from Malta. As described here, the move constituted the 1st official breach of the pact (about which we also posted here), but the move was preceded by much Napoleonic behavior that threatened the balance of power contemplated in the treaty and thus riled Britain. Telling a different story is French medal at left. (credit) It depicts a British big cat mauling the treaty scroll, and carries the slogan "Le traite d'amiens rompu par l'angleterre en mai de l'an 1803."