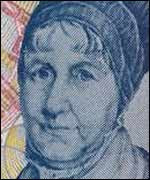 On this day in ...
... 1780 (230 years ago today), a daughter, Elizabeth, was born into a banking family in Norwich, England. They were "'relaxed'" Quakers, dressing in clothes more colorful and fashionable than was typical for their denomination. Over time she grew more serious, married and gave birth to 11 children. Elizabeth Fry became renowned for her work in English prisons, among them Newgate, where women were detained. Among her achievements was an end to shackling of women convicts during transport. She founded a prisoners' aid society and testified before Parliament. Her work extended beyond prison reform to include aid for the poor, training of nurses, rights for women, and abolition of the death penalty. As posted, societies bearing her name continue to work toward these goals. Fry's been depicted on Britain's £5 note (above right) since 2002. (credit)