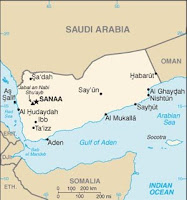 On this day in ...
... 1990 (20 years ago today), the Republic of Yemen was formed by the merger of the Yemen Arab Republic, or North Yemen, which had won independence from the Ottoman Empire in 1918, and the People's Democratic Republic of Yemen, or South Yemen, which had won independence from Britain in 1967. Several years of civil war would follow establishment of the new country, located at the southernmost point of the Arabian peninsula. (map credit)