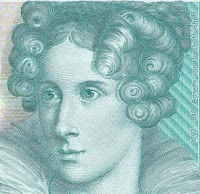 On this day in ...
... 1848, Annette von Droste-Hülshoff died at Meersburg, Germany, most likely of pneumonia, 51 years after she'd been born in Castle Hülshoff near Münster. A poet, she's described as "the only woman writer whose works are traditionally included in anthologies and discussions of nineteenth-century German literature." Droste-Hülshoff long was noted for her conservative Catholic outlook; however, recent scholarship has found in her circa 1840s Zeitbilder -- stories of the time -- "an acute awareness of the social and political changes in the period leading up to the 1848 revolution..." In pre-euro days, her image appeared on the 20 Deutsche Mark banknote (above right). (credit)