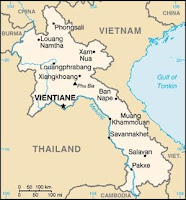 On this day in ...
... 1964, by letter "described ... mainly as a diatribe against the United States," sent by the Chinese Foreign Minister to the British chargé d'affaires in the capital city then called Peking, China refused Britain's request that it intervene to stop fighting in Laos. Fighting had begun in the wake of a coup in the Laotian capital of Vientiane, notwithstanding accords reached 2 years earlier in Geneva, Switzerland, (prior post). China accused the United States of backing one side in the turmoil.