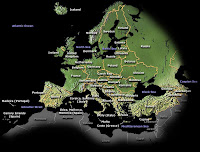 On this day in ...
... 1948, the post-World War II Congress of Europe opened at The Hague in the Netherlands. For the next 3 days, "some 800 activists representing the various European movements: met "under the honorary chairmanship of the former British Prime Minister, Winston Churchill." The meeting concluded with the adoption of a resolution

calling for the convening of a European Assembly, the drafting of a Charter of Human Rights and the establishment a Court of Justice responsible for ensuring that the Charter is properly implemented.

The conference thus was a key step toward European regional integration.