2 things jump to mind about the "Swamp Tour" my family and I took years ago through Louisiana's bayous:
► Try though we did, none of us caught even a glimpse of a 'gator.
► Even back then, those wetlands were mighty fragile.
Today the bayous that buffer New Orleans from the Gulf of Mexico are under siege. More than 200,000 gallons of oil a day are spewing into the Gulf as a result of an offshore rig explosion on April 20. (prior post) That's 4 million gallons and counting.
Already the environment is harmed. Tar balls, "sticky, dark-colored blobs," are washing up on beaches. So too dead animals -- turtles, fish, dolphins. Fishing families are out of work. These and other effects will be felt for years. 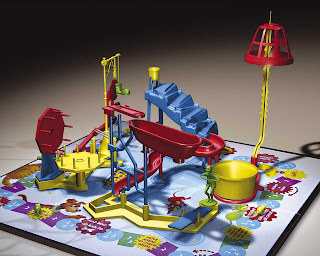 Nor is any sure solution in sight. Rather, as Rebecca posted, what's heard is one "Maybe this'll work?" after another. Televised computer-modeled animations of the (to date, failed) efforts make MouseTrap (left) look like serious business.
Odd, then, that not much seems to have been said so far about the precautionary principle.
As international environmental lawyers well know, that principle has origins from this passage in the 1992 Rio Declaration on Environment and Development:

Principle 15
In order to protect the environment, the precautionary approach shall be widely applied by States according to their capabilities. Where there are threats of serious or irreversible damage, lack of full scientific certainty shall not be used as a reason for postponing cost-effective measures to prevent environmental degradation.

In essence, the precautionary principle is a call for recalibration of cost-benefit analysis. When failure of an activity would cause a truly dire catastrophe, even the remotest possibility of that result requires the exercise of extra-special care. It's a rule of risk aversion.
But it can be costly, for its application may bar the activity, altogether or at least for the foreseeable future. And if the activity is something like drilling for oil, that obstacle means higher prices and lost profits.
Not surprising, then, that although the precautionary principle has retained some currency, it has not won full embrace.
It's positive law in City of San Francisco, but pretty much nowhere else in the United States. Westlaw cites only 10 federal cases that have used the term; none has applied it as a justiciable legal norm. Here's perhaps the fullest discussion, an explanation of why the court rejected a motion to dismiss that had invoked the principle:

The Plaintiffs' claims were based on the European Council's “Precautionary Principle” and the European Commission's “Science and Society Action Plan.” Neither document has been incorporated into domestic law, by international treaty or otherwise.

Sancho v. U.S. Dept. of Energy (D.Hawai‘i 2008).
And though the principle has applicability with regard to food, health, and the environment in the European Union, elsewhere abroad there's hesitation. What in 1992 was a "principle" has since been given a more discretionary phrasing -- "precautionary approach" -- by entities as varied as the International Law Commission, the International Tribunal of the Law of the Sea, and the WTO Appellate Body. (On the "subtle, but important, difference" between these terms, see Caitlyn's comment below.)
Approach? Principle? Whatever, the underlying idea seems like one that deserves consideration as the country reconsiders drilling in the wake of the Gulf Coast disaster. To be debated? A policy of requiring extra care before giving the go-ahead to something, when failure would cause damage too big to contain.
Call it Too Big to Fail.
by Diane Marie Amann at 5:30 AM

Generally, the 'principle' states that one will avoid actions that threaten the environment until they are demonstrated to not cause harm. The 'approach' requires an analysis be undertaken to understand risks, but does not imply that there be conclusive proof of lack of risk to the environment before the action can be taken. In effect, the 'precautionary approach' requires implementation of an approach to understanding risks but does not mandate that risk and uncertainty be eliminated before action can be taken. It also is more open to balancing potential harm and potential benefit.

There is a good explanation of the difference in Wikipedia's entry on the Precautionary Principle under the subheading "International Agreements and Declarations."