Should We Nationalize the Response to Deepwater Horizon? 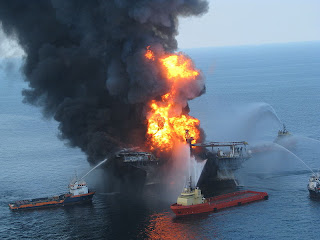 Deepwater Horizon is an unparalleled disaster, but it is also the inevitable result of a concerted and ongoing assault on the regulatory state.
The Bush administration did its best to gut the health and safety regulations, a project in which it was aided, abetted and funded by regulated industries. Indeed, as recently as last month, BP was still asserting that environmental risks from its offshore drilling activities were non-existent!
In 2002, the U.S. Coast Guard and the oil industry conducted a simulated response to an oil spill. One clear lesson from the exercise was that the industry did not have the technology to respond to a spill. The Coast Guard wrote in its after-report:

'Without requirements in place to require use of new response technologies they will not be developed and deployed adequately.'

That was eight years ago. Unfortunately, regulatory oversight was non-existent during the Bush years, and nothing happened.
After the Deepwater Horizon crisis began, President Obama partially reversed his earlier decision in favor of offshore drilling, and announced a moratorium for drilling new offshore wells. Unfortunately, the message doesn't seem to have gotten through. The New York Times reports that Mineral and Mining Service has been issuing permits anyway.
This moratorium must be invigorated and extended.
But what about the growing chorus demanding that the federal government take charge of the response to the disaster unfolding in the Gulf?
Dissatisfaction with BP’s transparency, its attitude, and its CYA approach to the cleanup are fueling the calls for taking direct governmental control over the response process.
To my mind, the real question is this:

What would change if we nationalized the response to the Deepwater Horizon blowout and spill?

It seems to me that there are three pressing goals:
► 1) stop the oil gushing into the gulf;
► 2) increase transparency; and
► 3) minimize and, if possible, reverse the ongoing environmental damage.
(Responding to economic injuries is obviously an equally pressing goal, but that process is already ongoing, and does not raise the same kind of “control of the process issues” that inhere to the ongoing environmental crisis. And, unfortunately, nothing can bring back the 11 people who perished in the explosion depicted above left.) (credit for April 21 photo)
I am not persuaded that the federal government needs to take actual control over the response in order to achieve whatever is possible on those fronts. Let’s take them in turn.

1) Stop the oil gushing into the Gulf. The federal government clearly has the authority to “federalize” the attempts to stop the flow of oil into the Gulf of Mexico. Section 311(c) of the Clean Water Act gives the government the authority to direct removal actions for a discharge determined to be a substantial threat to the public health or welfare of 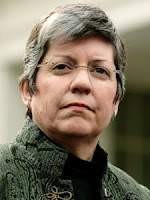 the United States. The April 29 designation by Homeland Security Secretary Janet Napolitano (right), stating that Deepwater Horizon is “a spill of national significance” under Section 300.323 of the National Contingency Plan, would seem to satisfy that criterion. Moreover, Section 2704(c)(3) of the Oil Pollution Act and Section 300.415(b) of the National Contingency Plan clearly contemplate that the federal government might conduct removal actions.
However, I am not persuaded that it is what we need most. As National Incident Commander Admiral Thad Allen said on Monday, in response to Interior Secretary Ken Salazar’s threat to push BP aside:

'[A]nd replace them with what?'

It is looking more and more like a relief well is going to be the only viable solution. If that is the case, it is really not clear how direct federal control would help things: the drilling of such a well or wells can’t be sped up, and the federal government would still need BP’s technical resources to drill the well, and to operate the technology.
Of course, Admiral Allen didn’t help things when he appeared to publicly endorse BP's leader. Admiral Allen may trust BP President Tony Hayward, but the rest of America doesn’t.
So, in terms of stopping the spill, maybe what we need isn’t the government actually doing the response, but instead using its oversight authority to the fullest extent, which the Administration, despite an admirable focus on the crisis, has not always done.

2) Increase transparency. Congress, and the public, have been infuriated by BP’s claims that various aspects of its response to the spill are secret -- in fact, are Confidential Business Information. (BP has made this claim with regard to footage of the leak, and to the composition of the acutely toxic dispersant Corex that it is dumping in the Gulf.) This is an area where the federal government can definitely do more with the authority that it has.
Having dumped 160,000 gallons of Corex, and defied the Environmental Protection Agency's directive to select a less toxic alternative, BP should not be able to turn around and claim that the composition of its chosen dispersant is confidential business information! Shame alone should have kept BP from even trying to do so. The EPA should aggressively use Section 14 of the Toxic Substance Control Act, which allows the EPA to release the information when it is
'necessary to protect against an imminent, unreasonable risk of injury to health or the environment.'
As Richard Denison of the Environmental Defense Fund points out, it is hard to imagine what would qualify as an "imminent unreasonable risk" if this doesn't.
Moreover, under Section 311(c)(1) of the Clean Water Act, the government has the authority to

'make any arrangements for removal or prevention, [and] direct removal actions.'

That authority clearly includes the authority to demand the release of information, like the videotape footage of the spill itself, that is necessary to make an effective response possible. In particular, without that footage, estimating of the size of the catastrophe is next to impossible, which is presumably the reason BP doesn't want to share it. As soon as independent scientists can analyze the footage, it seems pretty clear that BP's claim, that (only!) 5,000 barrels a day are gushing into the gulf, will lose what little credibility it retains.

3) Minimize environmental damage. Sadly, the feds, the states and local communities are already taking all kinds of actions. But, there is little to be done. The injury is devastating and likely permanent. As IntLawGrrls have noted in posts available here, birds, turtles, marine mammals, fish, and the communities that depend on those resources are suffering and dying.
What the federal government should be doing is shutting down all deepwater offshore wells until the oil industry develops technology for responding effectively to this kind of a crisis.
In light of what has occurred, any well approved with a similarly cursory glance at its environmental and safety risks clearly presents an imminent risk. Before any project can be restarted, we need real environmental impact statements, not categorical exemptions. The environmental impact statements should be prepared by an agency other than MMS, and should include explicit analysis of the technically daunting challenges of responding to a deepwater blowout.
by Rebecca Bratspies at 7:10 AM