Kudos to IntLawGrrls Connie de la Vega (right) and Michelle Leighton (left), whom the U.S. Supreme Court cited today in holding that the Constitution forbids sentencing a juvenile to life without parole for a nonhomicide offense.
The opinion for the majority in Graham v. Florida, by Justice Anthony M. Kennedy, discussed the significant -- though not dispositive -- nature of international context. In so doing, Kennedy cited not 1 but 3 works by Connie and Michelle: a book, a law review article, and the amicus brief they co-authored in the case at bar.
And the dissent added cite No. 4, as explained at bottom.
The key passage in the opinion for the Court began at p. 29 of the slip op., after the majority also comprising Justices John Paul Stevens, Ruth Bader Ginsburg, Stephen G. Breyer, and Sonia Sotomayor grounded the holding exclusively on domestic law. Here it is (with virtually all cites except those to the works by Connie and Michelle omitted):

There is support for our conclusion in the fact that, incontinuing to impose life without parole sentences on juveniles who did not commit homicide, the United States adheres to a sentencing practice rejected the world over. This observation does not control our decision. The judgments of other nations and the international community are not dispositive as to the meaning of the Eighth Amendment. But "‘[t]he climate of international opinion concerning the acceptability of a particular punishment’" is also "‘not irrelevant.’" The Court has looked beyond our Nation’s borders for support for its independent conclusion that a particular punishment is cruel and unusual.
Today we continue that longstanding practice in notingthe global consensus against the sentencing practice inquestion. A recent study concluded that only 11 nations authorize life without parole for juvenile offenders under any circumstances; and only 2 of them, the United States and Israel, ever impose the punishment in practice. See M. Leighton & C. de la Vega, Sentencing Our Children to Die in Prison: Global Law and Practice 4 (2007). An updated version of the study concluded that Israel’s "laws allow for parole review of juvenile offenders serving life terms," but expressed reservations about how that parole review is implemented. De la Vega & Leighton, Sentencing Our Children to Die in Prison: Global Law and Practice, 42 U. S. F. L. Rev. 983, 1002–1003 (2008). But even if Israel is counted as allowing life without parole for juvenile offenders, that nation does not appear to impose that sentence for nonhomicide crimes; all of the seven Israeli prisoners whom commentators have identified as serving life sentences for juvenile crimes were convicted of homicide or attempted homicide.
Thus, as petitioner contends and respondent does not contest, the United States is the only Nation that imposes life without parole sentences on juvenile nonhomicide offenders. We also note, as petitioner and his amici emphasize, that Article 37(a) of the United Nations Convention on the Rights of the Child, ratified by every nation except the United States and Somalia, prohibits the imposition of "life imprisonment without possibility of release . . . for offences committed by personsbelow eighteen years of age." Brief for Amnesty International et al. as Amici Curiae 15–17. As we concluded in Roper with respect to the juvenile death penalty, "the United States now stands alone in a world that has turned its face against" life without parole for juvenile nonhomicide offenders.
The State’s amici stress that no international legal agreement that is binding on the United States prohibits life without parole for juvenile offenders and thus urge us to ignore the international consensus. These arguments miss the mark. The question before us is not whether international law prohibits the United States from imposing the sentence at issue in this case. The question is whether that punishment is cruel and unusual. In that inquiry, "the overwhelming weight of international opinion against" life without parole for nonhomicide offenses committed by juveniles "provide[s] respected and significant confirmation for our own conclusions."
The debate between petitioner’s and respondent’s amici over whether there is a binding jus cogens norm against this sentencing practice is likewise of no import. The Court has treated the laws and practices of other nations and international agreements as relevant to the Eighth Amendment not because those norms are binding or controlling but because the judgment of the world’s nations that a particular sentencing practice is inconsistent with basic principles of decency demonstrates that the Court’s rationale has respected reasoning to support it.

(Prior IntLawGrrls posts on the juvenile sentencing issue are available here.)
Chief Justice John G. Roberts, Jr. concurred in the judgment. He did not join the passage above, nor, indeed, any passage in the opinion for the Court.
For the dissent's response to the international law point, see fn. 11, slip op. p. 19. There you'll find this citation by Justice Clarence Thomas to another work that Connie coauthored:

[D]espite the Court’s attempt to count the actual number of juvenile nonhomicide offenders serving life-without-parole sentences in other nations (a task even more challenging than counting them within our borders), the laws of other countries permit juvenile life-without-parole sentences, see ... C. de la Vega, M. Montesano, & A. Solter, Human Rights Advocates, Statement on Juvenile Sentencing to Human Rights Council, 10th Sess. (Nov. 3, 2009) ("Eleven countries have laws with the potential to permit the sentencing of child offenders to life without the possibility of release") .... 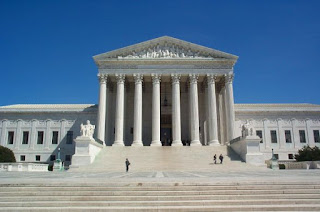