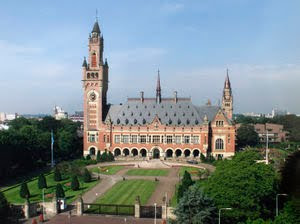 Talk about action.
No sooner had we signed off on the post below respecting women judges at The Hague than we heard word that another soon may be donning robes.
Rumor has it -- most likely an accurate rumor, given the source is our OJ colleague Roger Alford -- Joan Donoghue has been chosen to fill the U.S. vacancy at the International Court of Justice, located in the Peace Palace pictured at left.
Said to have been chosen by the U.S. national group, Donoghue, Principal Deputy in the Office of the Legal Adviser at the Department of State, would be poised to join that court along with another woman, diplomat Xue Hanqin, whom, as noted below, China's nominated to fill its vacant seat.
Donoghue's photo couldn't be found on the web. Her bio doesn't appear on the State Department weblist, though she's been with State Department for more than a decade. A web search indicates that back in 1994, as Assistant Legal Adviser for African Affairs, she was involved in State's efforts to define "genocide" in the context of massacres in Rwanda. In 2008, she gave testimony before a Senate committee on international regulation of doping in sports. Now a top aide to Legal Adviser Harold Hongju Koh, she served as Acting Legal Adviser early in the Obama Administration, while Koh's nomination was pending. On account of that title, her name also crops up in lots of early 2009 Guantánamo-related cybertraffic.
Roger reports that Donoghue was chosen over IntLawGrrls' own Lucy Reed and our colleague David D. Caron, respectively the immediate past and current Presidents of the American Society of International Law.
by Diane Marie Amann at 11:43 AM