Ballet at Sea? Who does BP think it is kidding? 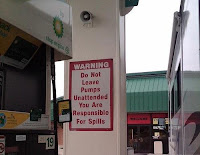 Much of BP’s s-called “charm offensive” (e.g. attempts to spin the Deepwater Horizon disaster as less than catastrophic) is already well known. The shameless attempts to minimize size of the spill, the ridiculous commercials, the attempts to prevent reporters from informing the public about the horrendous effects the oil is having on wildlife (warning—very upsetting video) and beaches, the dead sperm whale found not far from the spill, not to mention the 11 oil workers who lost their lives, all show a company more focused on minimizing liability exposure than on minimizing the harms that flow (no pun intended) from its actions.
But, even with all that evidence that BP’s crisis management cares more about damage control than on transparency, this “Report from the Gulf” on BP’s website made

my jaw drop. I am all for finding the beauty in the everyday, but who do they think they’re kidding??? Oil skimming is dirty, polluted work that puts the health of the clean up workers, whom BP at first didn’t even provide with protective gear, at risk, even as it barely makes a dent in the toxic soup they are spewing into the Gulf.
A few days ago, the Representatives Henry A. Waxman (D-Cal.) and Bart Stupak (D-Mich.), of the House Committee on Energy and Commerce sent BP a fourteen page letter detailing all of the multiple errors and poor choices that combined to create this disaster. Each one involved choosing to minimize costs by increasing risks. I have previously blogged about how the poor deregulatory choices the U.S. made over the last decade enabled BP to be so cavalier with the public good. (here, here and here). But, no amount of thinking about how this crisis occurred, or what lessons to learn from it could prepare me for the unmitigated gall of a company in full CYA mode. Hayward's testimony yesterday was more of the same.
In case you missed it, here is a link to a Rachel Maddow segment where someone read the “report” aloud against a backdrop of what sea skimming actually looks like.

p.s. This is a take that sums up the hypocrisy of BP’s “manage the public” approach to crisis response.