After decades of legal and political struggle to vindicate the innocence of thirteen persons killed during a civil rights protest in Derry on January 30 1972, known as Bloody Sunday, the report by the Hon Lord Saville of Newdigate was released last week to their families and a watchful local and global community.
The Report of the The Bloody Sunday Inquiry spans 10 volumes. As previously posted on IntLawGrrls, it is unequivocal that the deaths were “unjustified and unjustifiable” and that all those shot were innocent civilians who had given no cause for the use of force again them by members of the British paratroop regiment.
The symbolism of the Report’s delivery last Tuesday was deeply significant.
A packed house in the British House of Parliament in London and the crowd of which I was a part, at Guildhall Square in Derry (above left) -- both at centre stage -- waited and watched. (photo credit)
A newly elected and conservative British Prime Minister, David Cameron (below right), in a speech before the House of Commons, gave no political space for dissension. (photo credit) He confirmed that the army had fired the first shots; that no warnings were given before the soldiers opened fire; that none of the casualties were posing a threat; that soldiers lied about 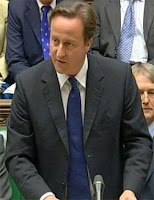 their actions; and that on behalf of the government and the country he was “deeply sorry”.
The Saville Inquiry was first commissioned by Labour Prime Minister Tony Blair in 1998 as part of the then-embryonic Northern Ireland peace process – a confidence-building measure aimed largely at the nationalist community, whose faith in the rule of law and the neutrality of the state had been seriously undermined by the events of that day, and the subsequent and much derided inquiry by Lord Widgery which had exonerated the soldiers and the state of responsibility.
The 12-year length of the Saville Inquiry proceedings was testimony to the complexity of the terrain it traversed, as well as to the continual obstacles placed in the way of proceeding by Britain's Ministry of Defence.
The Inquiry's outcome was unexpected for its clarity, for its directness, and for the starkness of its findings. It also tenaciously confirms the importance of redeeming and affirming the truth of contentious actions by the state.
The Report is received in the context of an ongoing political transition in a post-conflict society. It immediately raises the question of what comes next?
An obvious question is whether the prosecution of soldiers for offences of murder or manslaughter for their actions on the day by Northern Ireland’s Public Prosecution Service will be sought. Despite the clarity of Saville’s report, success is less certain in an adversarial setting. Fair trial concerns for soldiers, the admissibility of hearsay evidence, the passage of time, as well as undertakings given by the Attorney-General in 1999 that witnesses who provided evidence to the inquiry would be protected, all pose prosecutorial challenges. It seems more likely that prosecution of witnesses (specifically soldiers) for perjury would be successful given the depth and scope of evidence in the report itself. The families of the dead and the wounded have stated that they will take some time to read and consider the report before making calls for further specific legal steps.
But, in a wider context, the report has significant precedential importance for transitional societies.
It demonstrates the capacity of determined victims to successfully challenge and force the state to account for its actions in violating human rights norms. In this, it has given great impetus to other families and communities who experienced human rights violations during the same conflict (including further incidents involving the same paratroop regiment). While the Prime Minister may have fervently hoped that Saville closes the circle of inquiry – it may well be that it has exploded the calls to deal fully with the “past” of the Northern Ireland conflict.
Nonetheless, it is an important vindication of the state – particularly for the democratic state that has engaged in serious human rights violations – as the Report breathes life into the capacity of the rule of law to respond adequately and meaningfully to harms experienced by its citizens.
This was deeply evident last Tuesday on the streets of Derry – as a community that has been largely alienated from the state clapped and cheered a British Prime Minister acknowledging the faults of the state and seeking forgiveness.
In this, the Report also underpins the symbolic and communicative function of law – in its capacity to mend and offer individuals the means to heal deep harms and to bring communities “in” rather than to leave them out. Lord Saville's Report is both symbolically and practically important – for Northern Ireland and other conflicted societies addressing the past.
The debate on “dealing with the past” in Northern Ireland has not likely been closed by this important report. Rather, it opens up the possibility of deeper and more sustained engagement as the transition goes forward.