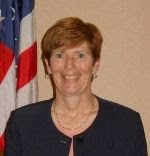 Secretary of State Hillary Clinton has confirmed that Joan E. Donoghue (left), Principal Deputy Legal Adviser at the Department of State, has been nominated to fill the U.S. vacancy on the International Court of Justice.
Since our last report of rumors to this effect, we've discovered the photo at left and a full web bio of Donoghue. Details:
Donoghue was educated in California, earning a double B.A. with honors in Russian Studies and Biology from the University of California, Santa Cruz, in 1978. (In addition to Russian, she's studied Arabic, Spanish, and French.) In 1981, she earned her J.D. from the University of California, Berkeley, School of Law, where she later served as a Visiting Professor of Law. Donoghue's also been an International Affairs Fellow at the Council on Foreign Relations and Adjunct Professor at the Georgetown University Law Center and at the George Washington University School of Law.
Donoghue began as an associate at Covington & Burling in Washington, D.C., then joined the State Department in 1984. She's pursued her legal career there ever since, with the exception of stints at Treasury as Deputy General Counsel (1999-2000), and at Freddie Mac, as Associate General Counsel and then General Counsel and Corporate Secretary (2001-2005).
At State she's served during both Democratic and Republican Administrations, as Clinton's statment stressed. Donoghue's been Deputy Legal Adviser, as well as Assistant Legal Adviser for several offices, including those responsible for economic affairs, African affairs, oceans and environment, and diplomatic law and litigation. She was appointed Principal Deputy Legal Adviser in September 2007. Her duties:

As the senior career attorney in the Office of the Legal Adviser, Ms. Donoghue advises the Secretary and other senior officials on all aspects of the Department of State’s international legal work, serves as the alter ego of the Legal Adviser and manages a bureau of 265 attorneys and support staff.

Donoghue is the recipient of many awards, among them the Distinguished Honor Award (the highest award given by the Secretary of State), the Presidential Rank Award, and the Federal Bar Association's Younger Federal Lawyer of the Year Award. Like many an IntLawGrrl, she's a member of the American Society of International Law.
In her statement, Clinton said of Donoghue:

She is judicious, fair, an extraordinary international legal counsel, and an excellent choice for the Court.