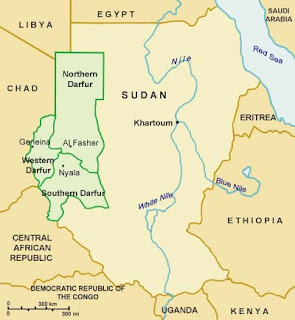 The crisis in Darfur remains on the international criminal justice agenda, not only at the ongoing International Criminal Court Review Conference ongoing in Uganda, but also, sadly, in that Sudanese region some thousand miles to the northwest of Kampala. (map credit)
In Kampala, Uganda
► At the Kampala Conference, a demand that Sudanese President Omar al-Bashir be held accountable for crimes committed in Darfur, particularly those against women and children, was made by the Nobel Women's Initiative, an Ottawa-based NGO founded in 2006 by 6 Peace Laureates: Jody Williams of the United States, Shirin Ebadi of Iran, Rigoberta Menchú of Guatemala, Irishwomen Betty Williams and Máiread Maguire, and Dr. Wangari Maathai of Kenya.
► Meanwhile, remarks this past weekend by Ugandan President Yoweri Museveni (prior IntLawGrrls post) prompted reports that Bashir had not been invited to the African Union summit scheduled for next month in Kampala, Uganda's capital city. As a Voice of America dispatch explained:

Uganda is a member nation of the ICC, and theoretically would be required to arrest Mr. Bashir if he attended the AU meeting.

But yesterday the BBC reported that after expressions of "outrage" in Sudan's capital, Khartoum, "Uganda's foreign ministry issued a statement to 'clarify' that Mr Bashir had been invited to the summit of African leaders." It's now said that the 1st statement was "misconstrued" from a remark that Bashir is in any event unlikely to attend.
In Darfur, Sudan
► Those events to the southeast occurred against the backdrop of a sharp rise in violence in Darfur itself. Dispatches this week cited a African Union/United Nations hybrid peacekeeping operation in Darfur (UNAMID) report that 600 people died in Darfur during the month of May, "the highest monthly toll since peacekeepers were deployed in 2008."
Casualties spiked after a breakdown in peace talks.
After multiparty elections in April -- Sudan's first in 24 years -- the rebels of the Justice and Equality Movement (JEM) claimed that the government had launched new raids against it, and thus walked out of negotiations then under way in Qatar. JEM announced on Monday that it intended to continue to boycott the talks, and asserted that its forces are clashing "continuously" with the Sudanese army.

It is unclear whether the increase of violence and this international pressure are connected. Any possibility of a link certainly plays into one of the deepest fears voiced about the International Criminal Court, and about international prosecutions generally: that prosecutions may upset the extraordinarily fragile peace of a post-conflict nation. This "peace vs. justice" argument often is advanced as a reason that countries are reluctant to prosecute war criminals -- sometimes even decades later, as has been discussed in IntLawGrrls' series on Khmer Rouge accountability in Cambodia.
Risks seem especially high in the case of Darfur.
► On the one hand, the situation in that region of Sudan marks the first time that the ICC has issued an arrest warrant for a sitting head of state. This occurred -- and continues to occur -- amid a crisis that can hardly be said to have reached the "post-conflict" stage. The warrant issued despite the absence of ICC power actually to arrest Bashir, and despite the absence of any U.N. Security Council action to effect that arrest. This standoff may be seen as an invitation to further violence and oppression.

► On the other hand, the prospect of regional policing holds some promise. While Sudan's indicted President (right) has reportedly travelled abroad "in defiance" of the warrant for his arrest, Bashir evidently has avoided ICC member states as destinations. This leaves one with the idealistic thought that perhaps he might dare Uganda and be arrested there next month -- not to mention the overly idealistic dream that his arrest would end the cycle of violence in Darfur.
But, like most issues, the question is not nearly so simple.
While international pressure to prosecute, particularly for crimes of gender-based violence, is a good thing, the international community must also pressure all warring parties in Sudan to come back to the negotiating table. It is only with peace that prosecutions will be meaningful symbols of justice in Darfur.
by Kathleen A. Doty at 1:00 PM