Days Two and Three in Kampala

KAMPALA, Uganda -- Days Two and Three at the ICC Review Conference have been very interesting. On Tuesday, June 1, the official program included statements by countries, intergovernmental organizations (IGOs) and nongovernmental organizations (NGOs). One statement that was listened to quite closely that of Ambassador Stephen Rapp for the United States, in which he raised several questions of concern about the ongoing discussions on the crime of aggression. The Netherlands announced that it had collected 112 pledges from 37 states to provide the ICC with financial and other assistance. For example, Australia pledged to provide 100,000 Euros to the ICC’s Trust Fund for Victims.
I also attended the final portion of the full-day Women’s Court, organized by the Women’s Initiatives for Gen 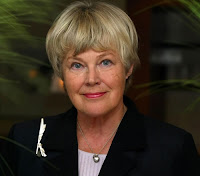 der Justice and held in the People’s Space tent. This portion focused on testimonies from individuals from Sudan and was chaired by Elisabeth Rehn, Chair of the Board of Directors of the Trust Fund for Victims (pictured left). I had read Halima Bashir’s book, Tears of the Desert: A Memoir of Survival in Darfur, on the flight to Kampala. In her book, Dr. Bashir describes how she – as a young Zaghawa medical doctor – treated victims of the Janjaweed militia, including schoolgirls who had been repeatedly and brutally raped. She, in turn for providing medical car

e for her own people, was beaten, tortured and raped by the Sudanese security forces. The three individuals speaking at the Women’s Court event described similar stories of rape, torture, killing, displacement, economic deprivation and desperate survival in Darfur. They also described how the laws in Sudan make it very difficult for rape survivors to seek justice, and how individuals suspected of supporting the ICC and other human rights defenders are targeted for detention and mistreatment in Sudan.
June 2 began with the first stocktaking exercise, on the impact of the Rome Statute system on victims and affected communities. Radhika 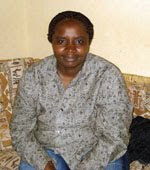 ictimes des violences sexuelles in the Democratic Republic of the Congo (pictured right), Elisabeth Rehn, Carla Ferstman of REDRESS, David Tolbert of the International Center for Transitional Justice, Binta Mansaray of the Special Court for Sierra Leone and Silvana Arbia of the ICC. Ms. Arbia, the ICC’s Registrar, noted that the ICC has received 2600 applications from individuals to be admitted as victim participants in the ICC process. Of these, more than 800 have been accepted by the Court. Several themes emerged from the stocktaking exercise, including:
In the afternoon, the stocktaking exercise on peace and justice took place. After hearing from panelists David Tolbert, peace mediator James LeMoyne, Youk Chhang of the Documentation Center of Cambodia and Barney Afako of the Juba peace process, states, IGOs and NGOs made statements and asked questions. Again, several interlinked themes emerged:
At the end of the day, the International Committee of the Red Cross (ICRC) launched its newest publication: The Domestic Implementation of International Humanitarian Law. For those interested in IHL, I urge you to check out this wonderful resource once it is posted on the ICRC website.
June 3 marks the second day of the stocktaking exercise, with a focus on complementarity and cooperation.
by Valerie Oosterveld at 5:15 AM