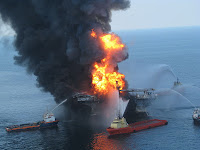 Ever since the Deepwater Horizon began gushing oil into the Gulf of Mexico, BP has been dazzling the American people with a series of colorfully named “solutions:” the dome; top hat, junk shot, top kill. However, as the days turned into week, and the weeks turned into months, one thing has become crystal clear. None of these fanciful solutions had ever been tried in deep water, and BP was making things up as it went along.
It is hard to escape the conclusion that BP was actually engaged in an elaborate theatre designed to divert attention from the fact that the only real hope of stopping the blowout leak is a relief well—a solution that is by no means guaranteed and is still two months away.
BP knew it had no way to stop this leak on April 20, the day Deepwater Horizon exploded. They knew it earlier that day when they elected not to conduct a cement bond log test. They knew it on April 9, 2010, when they claimed in written comments that their deep water drilling activities “would not have an effect, cumulatively or individually, on the environment”. They knew it in Mid-April when they chose the "cheap but risky" method to case the well. They knew it when they successfully lobbied to avoid having to install acoustic triggers as backup blowout prevention system. Worst of all, they knew it when they assured MMS that:

In the event of an unanticipated blowout resulting in an oil spill, it is unlikely to have an impact based on the industry wide standards for using proven equipment and technology for such responses, implementation of BP’s Regional Oil Spill Response Plan which address [sic] available equipment and personnel, techniques for containment and recovery and removal of the oil spill.

Indeed, it is an open secret in the industry that nobody has any idea of how to stop a deepsea leak. Shell Oil admitted as much in a 2000 Environmental Assesment filed with the Mineral and Mining Service. Shell received a permit anyway.
Viewed in light of this backdrop, BP’s parade of fancifully-named solutions looks like a deeply cynical attempt to manipulate public opinion. As long as breathless press 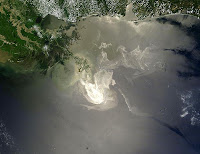 coverage focuses on minute-by-minute updates of each new attempt, it diverts attention from the question of why deepwater drilling was allowed at all when there was no way to respond to a disaster. Think about it—there was no Plan B at all.
It took almost two months, but people are finally starting to ask the key questions: how is it that the oil industry got away for so long with blithe assurances that off shore drilling posed no environmental risks? Why did extraction technology innovations flourish while cleanup technologies stagnated?
Answering those questions bares the dirty underbelly of the free market. There was a private value attached to extraction technology—its development meant that oil companies could generate profits from new resources. Development of these technologies were thus an investment in future profits. Safety and cleanup technology, on the other hand, got marked down on the expense side of the ledger—something to be minimized whenever possible. It all boils down to simple math: companies capture all of the profits associated with new drilling enabled by deepwater technology, but bear only a fractional share of the costs associated with the absence of safety and cleanup technology.
The role for regulation is to force expenditures on these kinds of developments—the ones for which there is not a business case but are vitally important to protecting the public’s heath and safety.
This is not some deep new insight, available only in hindsight. We have seen time and again that unless the law specifies otherwise, in a system where the gains and profits associated with an activity are privately captured, but the harms and costs of fixing the problems it creates are socialized, companies cannot be counted on to protect the broader public interests. The simple and tragic fact is that without a requirement that companies develop technology to respond to a deepwater blowout, the companies had no incentive to do so on their own. Indeed, the Coast Guard reached exactly this conclusion about deep-water drilling eight years ago. Turns out, the Coast Guard was right. In the absence of a regulatory imperative, technology to get the oil out if the ground advanced, but safety and environmental technology stagnated.
Over the past few decades, our elected leaders have denied this fundamental truth. Instead, we have repeatedly been told that “burdensome regulation” hinders business. President Reagan campaigned on the idea of “getting governments off our back.” We are now reaping the fruits of a regulatory approach that placed its trust in voluntary, ad hoc actions in place of systemic requirements. Among the "burdens" lifted from BP's back were the requirement to conduct a worst case analysis and the requirement that it develop and file a blowout plan for the particular facility. Had they been required to file s 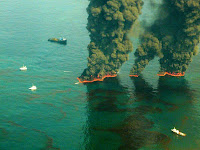 uch a plan, BP would have had to estimate how big an oil leak a blowout might produce, what technology was available to stop a leak, and how long it would take to drill a relief well. All information that would be mighty useful now. Instead, BP compiled a 582 page Regional Oil Spill Response Plan that is so generic it might be funny, were the circumstances less tragic. The "Plan" is full of helpful suggestions like: "identify and shut of the source [of a spill] as soon as possible." (p. 178). Interestingly, one of the first actions the Plan recommends is to calculate the volume of the spill either through direct measurements, data from flyovers, or from visual assessment of the outflow (p.235-40)--something BP repeatedly told the American public could not be done with any accuracy.
Deepwater Horizon is only the latest in a string of disasters highlighting just how misguided this laissez-faire approach has been. It is time to end lax oversight from understaffed and undermined agencies. The Bush Administration not only installed a revolving door between agency and industry, it went so far as to prohibit regulators from talking to the press, muzzling those within the agency who wanted to do their jobs well.
Gulf Coast residents are facing environmental and economic disruption well into the future; animals are dying by the thousands; vital ecosystems are destroyed, perhaps forever. All because of an obvious, but ignored risk. The corporations that we were good corporate citizens, and could be trusted to do what is right, did exactly what a rational, value maximizing individual with no constraints would be predicted to do—they invested in drilling technology and not in cleanup technology. The government that was supposed to be the bulwark against unfettered self-interest failed to force BP and the other oil companies to internalize the costs they were only too happy to externalize onto the rest of us.
Tellingly, not a single one of those “good corporate citizens” has imposed a voluntary moratorium on drilling. Even after the claim that “a spill is unlikely to have an impact" was exposed as a blatant falsehood, not a single entity that received drilling approval based on that falsehood has stepped up and done the right thing. Instead, we see strategizing about how to head off more and better regulation.
It is past time for governments to take action. There must be a moratorium on ANY drilling, existing or new, until there is a proven technology for responding to a spill.
by Rebecca Bratspies at 6:16 AM

under the radar said...

The US is dropping to Third World standards of regulatory strength, or lack thereof, in extractive industries. This is just what the multinational thug corporations love; check out their treatment of the environment and local population in places such as Nigeria and the Amazon. Bush/Cheney hugely facilitated this derogation of control, including Cheney's last-minute salting of mineral- and energy-related agencies with corporate minions, accomplished by granting numerous political appointees permanent civil service status at the very close of his administration. Yet Obama, too, gets a fat flaming F for sitting on his behind and letting business as usual in this area continue, in every regard, up to and beyond the day of the Deepwater Horizon blowout.

Theoretically, requiring already-feasible technical redundancies to enhance safety could allow ultradeep offshore extraction to proceed without this kind of disaster. Norway and Brazil both have much stricter drilling standards than the US, though arguably not strong enough. Another factor worth considering in our insanely disjointed division-of-labor world is the need to cultivate multi-disciplinary intelligent awareness among technical professionals whereby it's second nature for them to recognize that conditions a mile deep undersea make industrial processes exponentially more difficult to perform, and demand a correspondingly multiplied degree of care.

BP and subcontracted personnel -- some of the latter only after bitter argument -- cut corners in shoddy ways and ignored obvious grave warning signs at least a half dozen times over, setting the stage for this massive tragedy. One could argue that the subcontractor system itself screws up communication and coordination, making failures likelier. I'd go even farther than this, and propose the worldwide regulation of oil extraction as a public utility, dedicated to the public convenience and not the corporate profit motive. The availability of liquid fuel in this form is dwindlingly finite, but how many of the people who rail against drilling neither use cars nor rely on goods transported by motor vehicle?

To save the planet, coal extraction must flat STOP, and soon! Oil extraction, though, could perhaps proceed to its upcoming depletion-driven demise under conditions of strict care and increasingly stringent conservation standards.

Unfortunately, I found nowhere else to leave a comment on your blog so I decided to write my opinion here.
Firstly, thank you for this informative blog. However, since this blog has been dedicated to reviewing issues in International law, I was wondering why nothing has been mentioned on the Gaza issue and the attack by the isreali army on the flotilla headed towards the Gaza strip.
I would be grateful to read insightful opinions on this issue from a legal point of view.
Many thanks in advance.

Unfortunately, I found nowhere else to leave a comment on your blog so I decided to write my opinion here.
Firstly, thank you for this informative blog. However, since your blog has been dedicated to reviewing issues in International law, I was wondering why nothing has been mentioned on the Gaza issue and the attack by the isreali army on the flotilla headed towards the Gaza strip.
I would be grateful to read insightful opinions on this issue from a legal point of view.
Many thanks in advance.